Remembering Entebbe: The OTHER 4th of July Miracle 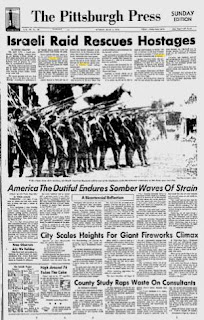 On America’s two hundredth birthday it was Israel that showed the world the “Spirit of 1776.”

On June 27, 1976, Air France Flight 139, carrying 248 passengers and a crew of twelve, took off from Athens, heading for Paris. Soon after the 12:30 p.m. takeoff, the flight was hijacked by two Palestinians from the Popular Front for the Liberation of Palestine – External OperationsGerman “Revolutionary Cells (RZ)” (Wilfried Böse and Brigitte Kuhlmann), who commandeered the flight, diverting it to Benghazi, Libya. The plane left Benghazi, and at 3:15 it arrived at Entebbe Airport in Uganda.

At Entebbe, the four hijackers were joined by three “friends” supported by the pro-Palestinian forces of Uganda’s President, Idi Amin. The hijackers were led by Böse. They demanded the release of 40 Palestinians held in Israel and 13 other detainees imprisoned in Kenya, France, Switzerland, and Germany–and if these demands were not met, they threatened to begin killing hostages on July 1, 1976 that deadline was extended to July 4th.

The hijackers held the passengers hostage in the transit hall of Entebbe Airport and released all the hostages except for Israelis and Jews, whom they threatened to kill if Israel did not comply with their demands. Upon the announcement by the hijackers that the airline crew and non-Israeli/non-Jewish passengers would be released and put on another Air France plane that had been brought to Entebbe for that purpose, Flight 139’s Captain Michel Bacos told the hijackers that all passengers, including the remaining ones, were his responsibility, and that he would not leave them behind. Bacos’ entire crew followed suit. A French nun also refused to leave, insisting that one of the remaining hostages take her place, but she was forced into the awaiting Air France plane by Ugandan soldiers. A total of 83 Israeli and/or Jewish hostages remained, as well as 20 others, most of whom included the crew of the Air France plane.

On July 4th 1976 shortly after midnight Israeli Planes landed at Entebbe and began their now famous rescue. The entire assault lasted less than 30 minutes and all six of the hijackers were killed. Yonatan Netanyahu (Bibi’s older brother) was the only Israeli commando who died during the operation. He was killed near the airport entrance, apparently by a Ugandan sniper who fired at the Israeli commandos from the nearby control tower. At least five other Israeli commandos were wounded. Out of the 103 hostages, three were killed and approximately 10 were wounded. A total of 45 Ugandan soldiers were killed during the raid, and about 11 Ugandan Army Air Force MiG-17 grounded fighter planes at Entebbe Airport were destroyed. The rescued hostages were flown out to Israel via Nairobi shortly after the fighting.

The government of Uganda later convened a session of the United Nations Security Council to seek official condemnation of the Israeli raid, as a violation of Ugandan sovereignty. The Security Council ultimately declined to pass any resolution on the matter. In his address to the Council, the Israeli ambassador Chaim Herzog said:

We come with a simple message to the Council: we are proud of what we have done because we have demonstrated to the world that a small country, in Israel’s circumstances, with which the members of this Council are by now all too familiar, the dignity of man, human life and human freedom constitute the highest values. We are proud not only because we have saved the lives of over a hundred innocent people—men, women and children—but because of the significance of our act for the cause of human freedom.

For refusing to depart when given leave to do so by the hijackers, Captain Bacos was reprimanded by his superiors at Air France (gotta love the French) and suspended from duty for a period.

Remembering Entebbe: A Message for Today?

This week marks the 31st anniversary of Operation Yonatan, Israel’s dramatic rescue of 103 hostages that took place on July 4, 1976 at Entebbe, Uganda.

As a college student in the US, I vividly remember watching events unfold as most of the rest of the nation was focused on the celebration of America’s bi-centennial.

Jews around the world held their breath as the terrorist incident ended with a relatively minimal loss of life. Pride and admiration for the daring and courage of Israel’s decision-makers and generals was the order of the day.

In Israel, the anniversary of the operation was marked for years by public official commemoration ceremonies. This year, it appears that the only remembrance will be for Yoni Netanyahu, commander of the operation and the only Israeli soldier killed at Entebbe. The Netanyahu family placed a newspaper ad announcing the annual pilgrimage to the grave of Yoni, older brother of Likud party leader Binyamin Netanyahu.

Back in July 2001, during the height of the terrorist war that followed the Camp David talks, things were different and an official state commemoration of the 25th anniversary took place at Binyanei Hauma in Jerusalem.

In a masterful, moving event that was at once entertaining and educational, the state of Israel marked the passage of a quarter of a century since the dramatic hostage rescue. If the event were to be translated and exported,

Israel ‘s image problems could be improved dramatically, and Jews the world over might even begin to regain pride in the Jewish state.

In the week leading up to the anniversary, Israel’s media focused on the unprecedented operation that took dozens of soldiers from Israel’s elite brigades on a daring and dangerous mission to rescue Jews thousands of miles away.

True to form, a post-Zionist columnist in Haaretz said the program, “Seems more like a propaganda film,” and opined “the Yoni that emerges from the film is not a flesh and blood character, but something closer to a modern day Bar Kochba.”

A few years after his death, the Netanyahu family published a book of Yoni’s letters written over a 13-year period between 1963-1976.

Entitled ‘Self Portrait of a Hero,’ the letters paint a picture of a passionate Zionist as they chronicle Yoni’s passage through the army and his participation as a paratrooper in two of the most crucial battles of the Six Day War.

The 25th anniversary event was attended by the nation’s leading politicians; those who took part in the Entebbe operation? former hostages and their rescuers; and thousands of soldiers from Sayeret Matkal, Tzanchanim and Golani? the brigades that carried out the rescue 25 years ago.

On film, we watched as the political leaders of 1976 debated what to do about the Jewish hostages who had been sitting under Ugandan dictator Idi Amin ‘s guard for days. The familiar faces of Yitzhak Rabin, Yigal Allon, Yitzhak Navon and Shimon Peres flitted across the screen.

Interspersed with film clips, the accomplished singing troupes of several army and air force divisions belted out some of the old rousing Israeli anthems.

President Moshe Katzav thanked those who had liberated the hostages. “We say to the terrorists of today: we did it then and we can do it now if we want.”

Following Katzav ‘s speech, several minutes of film of former hostages describing their ordeal were screened. The hostages tell of their disbelief that the IDF had sent their forces across the African continent to rescue them. In excruciating detail they calmly recount the selection procedure that separated the Jews and Israelis from the non-Jewish passengers on the Air France flight.

Foreign Minister Shimon Peres rose to speak and chose to address himself to the assembled young soldiers who filled the hall. He urged them not to think of the Entebbe fighters as legendary heroes. “Each of you has the potential to do the same thing,” he said. “You represent the best hope for the people.”

Next on film was a short clip of an interview with a handsome middle-aged civilian who was a pilot of one of the Hercules planes that left the Sirkin air force base for the seven hour trip to Entebbe. “We were so afraid of failure,” he says, his dark eyes looking unflinchingly at the camera. “But on the way back, I felt like it was Pesach. I recalled the words of the Hagaddah: ‘I and no angel: I and no messenger brought you out of the land of Egypt,’ concluded the pilot who wore no kippa on his silver hair. “If they told me now, 25 years later to go on such a mission, I’d go without hesitation. Ayn Lanu Eretz Acheret? we have no other country,” he said, in a theme that was to echo throughout the evening.

Film interviews with others involved in the rescue followed. Almost all those who played significant roles in Entebbe went on to illustrious military and political careers. We watched as Ehud Barak, Matan Vilnai, Dan Shomron and Ephraim Sneh spoke of their recollections twenty-five years on.

Shomron, the overall planner of the operation told the former hostages: “We knew we were endangering you too. No one had any idea how many would fall.

Two of the paratroopers came on stage to read short statements in their own words about their feelings on the anniversary of the operation.

One tall, balding man with a gray mustache said he was disappointed that his teenage son ‘s classmates knew nothing about Operation Yonatan. “We’re facing the same things today? they need more than virtual Zionism, ” he said.

Benny, a younger man who was only 13 years old when he was taken hostage by the terrorists, told the audience in a trembling voice that he remembers every moment of the torment. “I was a kid who saw death in front of him.”

Tzipi Cohen was only 8 years old when she witnessed her father Pasco bleeding to death as he was accidentally shot by Israeli soldiers in the confusion of the rescue. Pasco Cohen lifted his head to look for his son when the shooting started and became one of four Jewish hostages who perished in Uganda. His daughter ended her brief remarks by reiterating her gratitude to the IDF for saving all the hostages, despite her personal tragedy.

The final segment of the two-hour program was entitled ‘The Price.’ Besides the loss of Yoni Netanyahu and the four hostages, one soldier, Surin Hershko, became a quadriplegic as a result of the injuries he sustained at Entebbe. We watched on screen as Surin used his computer at home. He uses an elongated straw manipulated by his mouth to write on the keyboard.

Hershko is completely paralyzed, but rolled to the front of the auditorium in his wheelchair to reminisce about the last time he ran or walked. “I remember what it was to be a fighter,” he recalled.

After presenting Hershko with a special medal commemorating Entebbe, Prime Minister Ariel Sharon delivered a speech that tied Israel’s efforts to combat terror in the 1970s to today’s struggle against the same enemy:

“In these confusing times, when there are those who question our capabilities or the justness of our cause, we return to those few hours when Israel stood up and in the face of the entire community of nations, waged a battle against violence and terrorism, proving that we can win.

These days, when we are in the midst of an ongoing battle against terrorism, violence and incitement, and when we are making a joint national effort to return to political negotiations without fire, we must rekindle the spirit of that operation. The secret of our strength lies in such spirit and faith, and if we learn how to renew it we will be able to meet all the challenges that still lie ahead.”