Obama's Latest Theory on The Gulf Oil Spill: Blame Congress, or the Tea Parties or the Press 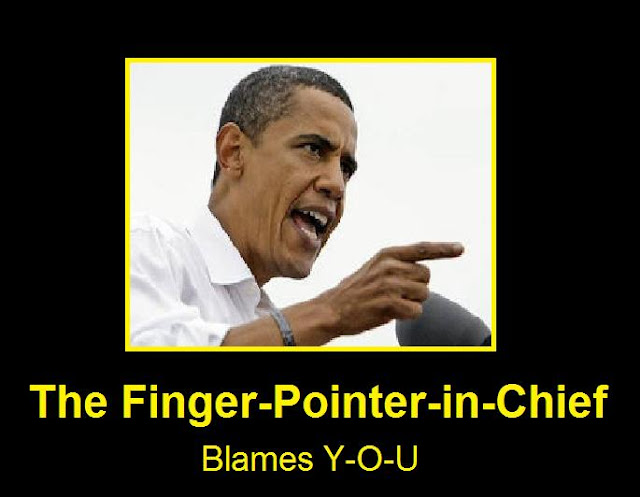 After blaming the policies of the previous administration and BP for the oil spill in the Gulf of Mexico, the President has found a new “A** to Kick” Congress.

In an interview with Roger Simon of Politico,The-Finger-Pointer-in-Chief has decided to point his blame digit toward congress, telling the congress that some members of Congress should share the blame for the Gulf of Mexico oil spill.

“I think it’s fair to say, if six months ago, before this spill had happened, I had gone up to Congress and I had said we need to crack down a lot harder on oil companies and we need to spend more money on technology to respond in case of a catastrophic spill, there are folks up there, who will not be named, who would have said this is classic, big-government overregulation and wasteful spending.”

Actually Mr. President we are still saying that your are trying to engineer a takeover of our society.

“You know, what I think I get frustrated with sometimes, as do, I suspect, other members of my team, is that the media specifically is demanding things that the public aren’t demanding,” the president said. “What the public wants to see is us solving this problem. And that may not make for good TV.”

Ah so now its all the fault of the Media. So which one is it Mr. President, Congress, the Tea Party or the Press? Or is it just anybody except you.

Did Team Biden Even Consider the Optics of This Moment During Florida Trip?
Townhall
Tweeter risks wrath of some of America's most privileged lib journos in order to expose their efforts to hide their backgrounds from the public; UPDATED
Twitchy
Supreme Court to Hear Case of Man Who Got Four Days in Jail for Mocking a Police Department on Facebook
Redstate
The Morning Briefing: Can a Republican Majority Rein In the Lawless DOJ?
PJ Media