Andrew Sullivan Is Entitled To His Opinion, But Not To His Own Facts 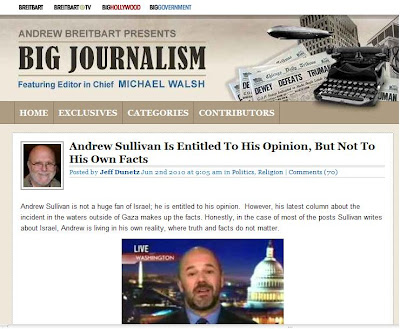 I get it, Andrew Sullivan is not a huge fan of Israel; he is entitled to his opinion.  However, his latest column about the incident in the waters outside of Gaza makes up the facts. Honestly, in the case of most of the posts Sullivan writes about Israel, Andrew is living in his own reality, where truth and facts do not matter.

The Atlantic columnist begins his latest example of creative writing begins with the first paragraph.

Maintaining the siege and blockade of Gaza (because its citizens elected a government Israeli abhors), and strafing it with military might over a year ago, is not exactly what one expects of a civilized Western state. To then go on the offensive against a flotilla of aid ships, trying to bypass the blockade, and killing at least ten people aboard is bordering on insanity…

Can you spot the three lies in the paragraph above? Please go over to Big Journalism and read how this and just about everything else Sullivan pens about the Middle East represents his own set of realities.  .

Reparations: A German Music Foundation Reaches Out to Right a Wrong Done Long Ago
Alex Parker

Meanwhile, 'How to Blow Up a Pipeline' Is a REAL Book — And It's 'Getting Rave Reviews'
Mike Miller

'The View': GOP is the Party of Isolationist, Kid-Caging, Radical Racism
Alex Parker