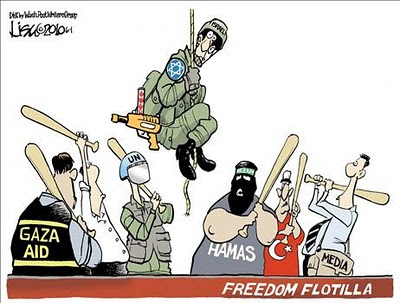 The terrorist chieftains running Hamas are up to their old tricks, holding the people of Gaza hostage to their terrorist aims. This time they have announced that they would not allow
the Humanitarian aid from the Guerrilla Flotilla to enter the Gaza Strip.

“We refuse to receive the humanitarian aid until all those who were detained aboard the ships are released,” said Ahmed Kurd, Minister for Social Welfare in the Hamas government said. “We also insist that the equipment be delivered in its entirety.”

Israel held back construction equipment that could be used by Hamas to build tunnels into the Sinai to smuggle rockets into Gaza.

The Hamas minister said that Israel’s decision to send some of the aid that was seized aboard the ships to the Gaza Strip was designed to divert attention from the “massacre” that took place in the sea.

Calling for lifting the blockade on the Gaza Strip, Kurd welcomed Egypt’s decision to reopen the Rafah border crossing. He expressed hope that the terminal would remain opened on a permanent basis.

Taher a-Nunu, spokesman for the Hamas government, said that the issue of the humanitarian aid would be resolved only through consultations with the organizers of the convoy in Turkey.

Hamas has a history of blocking aid to the people of Gaza. During the conflict with Hamas in late 2008/early 2009 the Arab press published many reports like the one below showing that Hamas was hijacking the humanitarian aid to keep it from the people.

Bethlehem – Ma’an – The Jordanian news agency Petra reported on Tuesday that armed men held up an aid convoy after it crossed into the Gaza Strip.

The agency reported that armed men fired at the trucks and diverted them to private warehouses after they passed through the Kerem Shalom border crossing, an Israeli-controlled crossing used primarily for shipments of humanitarian aid.

The supplies had been donated by the Hashemite Jordanian charity organization. The trucks earlier crossed into the West Bank using the Allenby Bridge and then proceed to Gaza.

According to the report, the charity had coordinated in advance with UNRWA, the UN’s agency for Palestinian refugees, to receive the shipment in its warehouses after it entered Gaza.

Also according to the report, UNRWA has suspended other aid shipments as the trucks and drivers are still being held in Gaza. Negotiations are reportedly being held for their release.

The Issue is not humanitarian aid, as this report from CIC shows, Over one million tons of humanitarian supplies were delivered by Israel to the people of Gaza in the past 18 months – that’s equal to nearly one ton of aid for every man, woman and child in Gaza.

You see there is no Humanitarian crisis in Gaza, it is a crisis of appeasement!