Cross-posted from The Lid

America continues to reject the Obama agenda and voters disapproval of the agenda continues to grow. The latest Rasmussen study show that Obama’s Presidential approval has sunk to an all time low. Only 42% of American’s approve of the job Barack Obama is doing as President, 56% disapprove which ties the all time high.

Those who strongly approve (24%) and strongly disapprove (44%) also tie record numbers.  As you can see on the chart below, the Presidential approval trend since the signing of Obamacare, as well as the other numbers have been unfavorable. (double click on the chart to see it larger). Strong approval/disapprove is a key number as it also indicates the passion of the voters, the higher the disapproval the more likely the voter will work against the president in the next election. 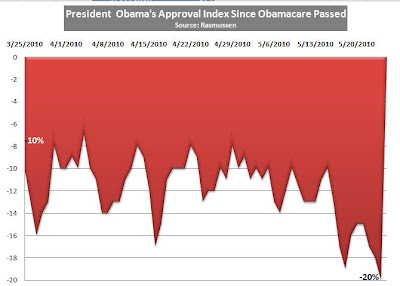 Another potential warning sign for the President and his policies, is party affiliation. While Democrats generally believe Obama is doing a good job and Republicans generally believe is not doing a good job, the key group who will probably determine most elections, the independents, stand with the Republicans in not approving the Job the POTUS is doing. 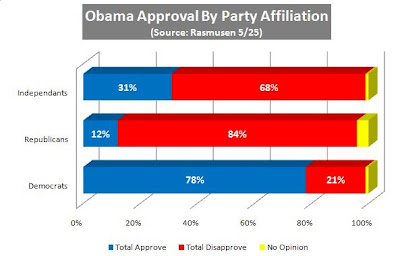 Putting it all together it seems as if America is waking up from the “stupor” of November 2008. The real question is will it translate congressional votes during the mid-term election.

According to the Rasmussen Generic Ballot, the Party Affiliation trend is similar to that of approval: 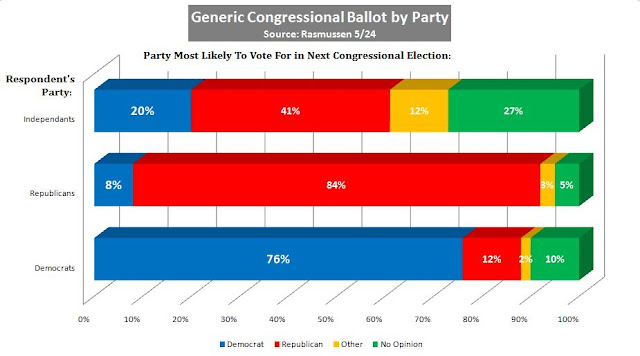 What does this all mean? All signs point toward a Republican takeover of the house this November, providing that the GOP doesn’t do a ton of stupid things during the next few months, or (God forbid) that there isn’t some sort of major crisis facing the country, such as an international attack or economic mess worse than what we faced two years ago.

Could One of Pres. Trump's Enduring Legacies Be Exposing a Decline in Civilian Control of the Military
Shipwreckedcrew