You can put away the SCUBA suit, or better yet pawn it and use the money to purchase a snow suit.  According to two sets of peer reviewed research the “global warming” is not causing the sea level to rise, and its about to get very cold outside.

This week Chicago Hosted the 4th International Conference on Climate Change. The conference gives scientists the ability to present peer reviewed research that does not agree with the IPCC-types who are doing their best to suppress the truth about the global warming hoax (source: Fox News)

Sea Level: Nils-Axel Morner, former head of the paleogeophysics and geodynamics department at Stockholm University reported that observational records from around the world who according to the IPCC were most threatened (locations like the Maldives, Bangladesh, India, Tuvalu and Vanuatu) show the sea level isn’t rising at all.

Morner’s research(his presentation is embedded below) demonstrates that there is no “alarming sea level rise” across the globe, and it says a U.N. report warning of coastal cities being deluged by rising waters from melting polar ice caps “is utterly wrong.”

Morner also checked out the sea-level changes in major cities around the world including Venice, Amsterdam, Copenhagen and Mumbai, as well as islands such as the Maldives. A total of 159 stations were used for the research. His study showed that there was a maximum of 3 millimeters of sea level rise in some locales around the world, and many coastal cities showed no rise at all.

The chart below is from Morner’s presentation It compares the IPCC model (in purple) to Morner’s observational study (blue line). As you can see, the actual sea levels fell in the 1960s and has been relatively flat ever since. The IPCC model shows a constant rise. The reason for the difference is simple, the IPCC based its curve on a computer model, Morner took satellite data and actually looked. It is the equivalent of the weatherman predicting rain but never looking out the window to see if the precipitation is actually happening. 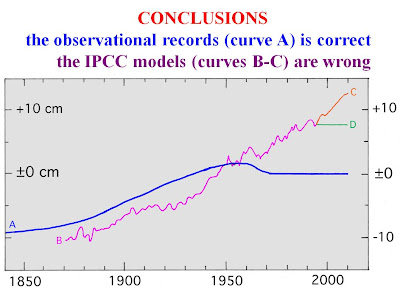 Someone should tell the IPCC, that they could learn so much by opening their eyes.

You can see Dr. Morner’s full presentation below at the end of this post.

Global Cooling: Dr Don Easterbrook, who has published over 150 peer-reviewed scientific studies, warns that a destructive world-wide climate change us upon us. Easterbrook says we should expect global cooling for the next 2-3 decades that will be far more damaging than global warming would have been. He bases his prediction on looking at temperature changes ever the past 500 years. 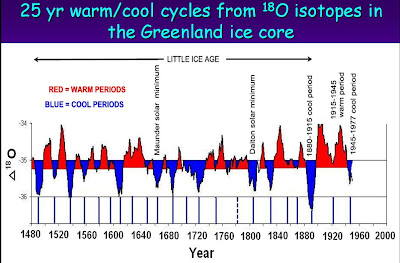 Those climate changes correspond to changes in solar activity.

Easterbrook made several stunning claims about the effects of the coming cold. There will be twice as many people killed by extreme cold than by extreme heat, he predicted, and global food production will suffer because of the shorter, cooler growing seasons and bad weather during harvest seasons.

Based on new analysis of ice cores from Greenland to Antarctica, Easterbrook said global temperatures rose and fell from 9 to 15 degrees in a century or less — swings that he said were “astonishing.”

Yikes that sounds bad. I suspect at the first sign of the predicted cooling Al Gore will either blame it on CO2, or find a way to make millions off of a global cooling scheme. Both the sea level rise and the global cooling presentations are embedded below:

It Sure Looks Like CBS News Edited Body Cam Footage to Omit a Key Frame in Adam Toledo Shooting
Townhall
'Journalism...ish': The Oregonian deletes 'poorly worded' tweet on the police-involved shooting of a 'white male in his 30s' in Portland park
Twitchy
Men Are Getting Tired of the Hyper-Sexualized Woman
Redstate
Joe Biden a No-Show to Greet Japanese PM—and the Preview of a President Harris Is Awful
PJ Media