SEIU Wants Fries and a McApple Pie With That Card Check 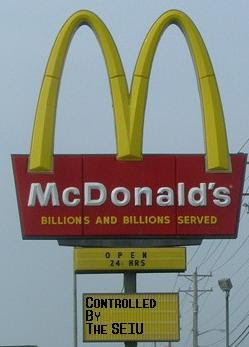 Remember card check? That provision in the Employee Free Choice Act that takes away free choice by eliminating the secret ballot? Many people think that the Employee Free Choice act is dead, but as long as the Democrats control congress and there is a Progressive Democrat in the White House, this act that will take away free choice from workers and intimidate them into joining Unions is still alive.

President Obama’s favorite thugs, the SEIU has already drawn up their plans for the post-card check world, and its a whopper. They are going after fast food

One of the primary goals of Mary Kay Henry, the new SEIU President, was to make peace with the rest of the labor movement. But that went out the window when she annouced a multi-million dollar fund to unionize various industries including grocery workers:

The $4 million fund will be used to organize industries that have traditionally not had employee representation, Henry said. She cited banks, grocery stores, biotechnology companies and independent contractors as prospects, without mentioning specific firms. The union said it spends about $250 million annually to help local officials on organizing.

OOPS, Ms Kay forgot that Grocery workers are the realm of the United Food and Commercial Workers Union so the SEIU quickly sent out this press release:

SEIU plans to engage in conversations with sister unions throughout the labor movement to discuss our shared interests. However, despite a recent media report, SEIU has no intention of organizing grocery workers. SEIU fully recognizes the food sector as a core industry of sister union United Food and Commercial Workers International Union (UFCW), which represents more than a million supermarket workers.

What the press release forgot to mention is that the SEIU is already poised to go after restaurant workers. In December 2009 they drew up plans to go after the hundreds of thousands of non-unionized restaurant workers  employed by chain restaurants as soon as card check is approved. In other words, they want fries and a McApple Pie With That Card Check

In the plan (embedded below) their first target is Los Angeles, and within the first six months they will move to the east coast:

Our initial probing in this industry has taken place in the Los Angeles metro area. Los Angeles County has over 60,000 fast food workers in just the top ten chains. When we mapped out the restaurants of the major chains, we saw that they encompass large groupings of low income tracts. While just over 20,000 workers are employed in the top 10 chains in Fast Food in LA, we have broke [sic] down 75% of the geography into 4 Clusters. This encompasses just over 15,000 of the 20,000 workers.

…Organize 15,000 food service workers in LA County and thousands of additional workers in an east coast market within the first 6 months, and begin raising the standards for these workers.

Keep in mind what they mean by “raising standards,” higher wages and lower productivity, all with the blessing of the US Government. While today it may take two hands to handle a whopper, after the SEIU gets a hold of McDonalds, it will take four-six hands and the cost will rise substantially.

This is how the SEIU lays out its strategy: 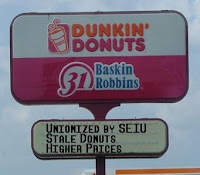 Move fast and furious with an army of 200-300 Staff/MOs/VOs/other volunteer organizers and the necessary number of leads to:

In other words, all of those teens and young adults working in the local Burger King will be be intimidated into joining a union by an “army of 200-300 Staff/MOs/VOs/other volunteer organizers.” How am I so sure it will be intimidation? Because the Union is not trying it now, they are waiting for card check to take away the secret ballot.

And in case you are wondering if the “new” SEIU management will follow through on the plan, Remember, Mary Kay Henry has committed $4 million to organizing and was part of the Executive Board at the time of this proposal.

The rest of the proposal is below:

H/T and For more news and views on today’s unions, go to LaborUnionReport.com.

IN MY ORBIT: The Godless Love to Tell the Godly How They Should Vote