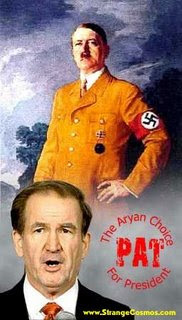 It was William F Buckley Jr who confirmed that Buchanan hated Jews.  In Search of Anti-Semitism” December 31, 1991, subsequently made the cornerstone of a book, William F. Buckley, Jr. concluded, that Buchanan was indeed an anti-Semite:

I find it impossible to defend Pat Buchanan against the charge that what he did and said during the period under examination amounted to anti-Semitism, whatever it was that drove him to say and do it: most probably, an iconoclastic temperament.

He is once again displaying his putrid venom by objecting to the nomination of Elena Kagen, not because of her liberal philosophy, or the fact that her college thesis was a positive look at socialism. No, Buchanan’s objection was:

Probably the most harmless thing Buchanan has done is perpetuate the Myth that the Jews controls foreign policy.

In Buchanan’s essay “Whose War” he blames the Iraq war on a bunch of mostly Jewish public figures such as Bill Kristol, Paul Wolfowitz, Max Boot, and Richard Perle. Buchanan charges those public figures with “colluding with Israel to ignite wars and destroy the Oslo Accords. We charge them with deliberately damaging U.S. relations with every state in the Arab world that defies Israel or supports the Palestinian people’s right to a homeland of their own.” He goes on to say, “For whose benefit these endless wars in a region that holds nothing vital to America save oil, which the Arabs must sell us to survive? Who would benefit from a war of civilizations between the West and Islam? Answer: one nation, one leader, one party. Israel, Sharon, Likud.” ( The American Conservative Whose War?, A neoconservative clique seeks to ensnare our country in a series of wars that are not in America’s interest. by Patrick J. Buchanan, March 24, 2003 issue)

Buchanan is also a holocaust denier, he  challenged the historical record that thousands of Jews were gassed to death by diesel exhaust at Treblinka:

“Diesel engines do not emit enough carbon monoxide to kill anybody.” -New Republic, 10/22/90

Of course none of this is enough to get this hater silenced, he is still given air time by MSNBC, and allowed to write for sites such as Newsmax, Human Events, and World Net Daily. Today, once again the human rodent spewed his his anti Semitic hatred:

….Not since Thurgood Marshall, 43 years ago, has a Democratic president chosen an African-American. The lone sitting black justice is Clarence Thomas, nominated by George H. W. Bush. And Thomas was made to run a gauntlet by Senate liberals.

Is this the Democrats’ idea of diversity?

But while leaders in the black community may be upset, the folks who look more like the real targets of liberal bias are white Protestants and Catholics, who still constitute well over half of the U.S. population.

Not in living memory has a Democratic president nominated an Irish, Italian or Polish Catholic, though these ethnic communities once gave the party its greatest victories in the cities and states of the North.

This is the usual Buchanan m.o. attacking Jews. For those of you who would argue that Buchanan is just arguing diversity, he said something very similar about the Senate in 2003

“If you want to know ethnicity and power in the United States Senate, 13 members of the Senate are Jewish folks who are from 2 percent of the population. That is where real power is at..” (“The McLaughlin Group,” Feb. 2, 2007)

If he was attacking any other group he would have been fired long ago, yet he is allowed to continue spewing his hatred not only by MSNBC (who fired Don Imus for less), but by Newsmax, Human Events, and World Net Daily and invited to appear as a guest on programs such as Sean Hannity because obviously Jews are fair game. Shame on them all for allowing this hater to have a soapbox.