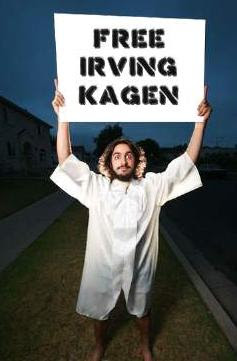 The Obama administration is keeping Supreme Court nominee Elena Kagan’s family under lock and key. We don’t know if it is a “home arrest,” or whether they have been shipped to some political internment camp. OK we do know, they have simply been told by the Administration to shut the heck up.

President Obama is treating the Kagen nomination totally different than that of Sonia Sotomayor. It is normal for the nominee to avoid giving interviews until after confirmation. After all, they want to avoid slipping up during an interview and I don’t blame them. But the family of the nominee has always been fair game to the press.

The NY Times reports they had an interview all set with Elena’s brother Irving. They received permission on Tuesday from Hunter College High School in Manhattan to observe a constitutional law class taught by brother Irving, followed by an interview. But when presented with the idea, the White House said no because they were “uncomfortable with the idea at this time.”

That’s funny, because less than a year ago they allowed Juan Sotomayor brother of then nominee Sonia, talk to ABC’s Claire Shipman (see below) why wont they allow Irving speak?

Its not just Irving,Even Kagan’s cousin, Gail Katz-James of Minneapolis, spoke to the Times, saying the family just really enjoyed debating and discussing everything. But when the  same reporter tried to get more comment from Katz-James just two days after the story ran she replied, “I’m sorry, I’m not able to talk to you.”

Wow that was fast! This stonewalling by the most “transparent administration in history” is concerning, it makes one wonder what the administration is trying to hide. After all Red State has already published Kagen’s College Thesis which is all about socialism, what could brother Irving or Cousin Gail say? Certainly nothing worse than her thesis.

Mr. President I am urging you, Please Free Irving and Gail. Don’t make me have to cook one of those cakes with a file microphone. Otherwise people will keep on digging until they find what you are hiding.