Two months ago the US State Department released its review of how governments across the world treat the human rights of its citizens, this is how the report summarized the situation in Libya

The government’s human rights record remained poor. Citizens did not have the right to change their government. Continuing problems included reported disappearances; torture; arbitrary arrest; lengthy pretrial and sometimes incommunicado detention; official impunity; and poor prison conditions. Denial of fair public trial by an independent judiciary, political prisoners and detainees, and the lack of judicial recourse for alleged human rights violations were also problems. The government instituted new restrictions on media freedom and continued to restrict freedom of speech (including Internet and academic freedom). It continued to impede the freedom of assembly, freedom of association, and civil liberties. The government did not fully protect the rights of migrants, asylum seekers, and refugees, and in some cases participated in their abuse. Other problems included restrictions on freedom of religion; corruption and lack of transparency; discrimination against women, ethnic minorities, and foreign workers; trafficking in persons; and restriction of labor rights.

As a reward for its awful human rights record, Libya was elected to the United Nations Human Rights Council, where it also joined these other nations with lousy human rights records. Libya needed 97 votes to win, but on a secret ballot, a whopping 155 countries, or 80 percent of U.N. members, thought Libya would be a great addition to a Council to debate human rights violations. 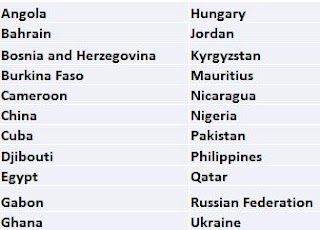 And where was the United States Ambassador Susan Rice during this election ? SHHHH ! Don’t wake her, she is still sleeping. Ambassador Rice was in the same place she was during the obscene vote to put Iran in the Commission for Woman’s Rights, absent.

At a U.N. so lacking in moral compass that all this counts for business as usual, the U.S. made no fuss. Washington went with the flow.

In the calculus of the Obama administration all this may rate as mere diplomatic horse-trading. Apparently in the latest round of U.N. seat-filling, the State Department quietly succeeded in derailing Iran’s bid for a seat on the Human Rights Council. As a consolation prize Iran got smooth sailing into a berth as an authority on women’s rights. Meanwhile the gaggle of despotisms already on the Human Rights Council (including China, Russia, Cuba and Saudi Arabia) lost the chance to consort there with Iran, but can comfort themselves by collaborating with Libya.

For America to swim along with this is not smart diplomacy. It is at best naïve. It emboldens the worst violators of civilized norms, and further compounds the already alarming failings of the U.N., a sprawling and opaque collective which lends itself to exploitation by the most ruthless and corrupt of its 192 member states. Over the years the only real check on U.N. depravity has been U.S. leadership and oversight–moral, political and administrative.

That check on UN depravity is gone. Under Barack Obama the foreign policy of the United States has lost its moral compass. In his rush to become popular in the Muslim world we have stopped caring about right and wrong in our relationship with other nations. We pursue negotiations with a terrorist Iran and Syria, even after they have slapped away our outreached hand and have armed our enemy in Iraq and Afghanistan.  At the same time we have warned the first target of Iranian nuclear weapons, Israel, not to defend herself. We punish Honduras for protecting herself against an unconstitutional take over while at the same time we reach out to despots like Chavez.

When the United States loses its morality in her foreign policy, we lose our right to be the leader of the free world. Beginning with his apology tour, this President has shown that he rejects this responsibility. His rejection of a moral  in the UN Human Rights council is just another example of his rejection.

The Day the Electricity Died
Townhall
Loudoun County, VA middle school librarian allegedly defends pro-prostitution book for reasons you won't believe
Twitchy
Trump Closes the Door on Liz Cheney With Rip-Roaring Rally for Her Opponent in Wyoming
Redstate
Why the Heck Did Amber Heard's Legal Team Call Her Back to the Stand?
PJ Media