Think Progress Steps in Dog Crap: Refuses to Wipe it Off

The Center for American Progress, a non-profit progressive think tank organization under section 501(c)(4) of the Internal Revenue code. The Center is run by former Clinton chief and Obama transition director John Podesta (and funded in part by George Soros). Although  they claim to be non partisan, think progress is a key part of Obama’s drive to drive the progressive agenda down America’s throat. One of the Center For American Progress’ “subsidiaries” is Media Matters, the media website that attacks anything conservative. Another project of theirs is the blog,Think Progress.

Yesterday, Think Progress made a scoop that was more of a pooper scooper.They reportedthat telecom companies were “hiring front groups and Astroturf operatives” to fight Net Neutrality, the FCC’s attempt to take over the internet. Think Progress goes on to boldly  brag how they got their hands on a secret Power Point presentation called “Net Brutality” which shows the telecom’s secret plan to stop the FCC’s takeover.

On first glance it seems like John Podesta’s folks dug up an incredible scoop. But first glances are often wrong.  According toCNET News this “ top secret” presentation was merely  an entry in a student contest run by the Atlas Economic Research Foundation’s “think tank MBA” program. The presentation was given at an event in Florida and then posted on the Atlas website. Essentially, the Power Point is nothing more than a project put together by student contestants – and far from a secret. Unless the telecoms are like the IPCC, they wont be using student projects for their anti-Government takeover of the internet plan, especially one that was thethird-place entry.

In a case of truth being stranger than astroturf, it turns out that the PowerPoint document was prepared as a class project for a competition in Florida last month. It cost the six students a grand total of $173.95, including $18 for clip art.

The “No Net Brutality” campaign idea was one of the four finalists created as an assignment for a two-and-a-half week “think tank MBA” program. The other finalists were a project promoting free speech in Venezuela, one supporting education reform in Poland, and one dealing with sales taxes rates in Washington, D.C. (“No Net Brutality” came in third. The Polish reform idea won.)

Not only was the PowerPoint document presentation no secret, but it wasposted publiclyon the competition’s blog, along with anaudio recordingof the event in Miami where the student contestants presented their ideas to the judges.

I believe the blogging term for this is OOPS.

“The Think Progress article is hilarious,” David MacLean, the Canadian member of the six-person student team from four different continents, told CNET on Wednesday. “We’ve had a really good laugh in the last day over this. This is one of the funniest things I’ve ever seen.”

MacLean added: “It was a class project done at the Atlas think tank MBA program. We came up with the concept in a few days.” Part of Atlas’ curriculum on how to manage think tanks required creating the campaign on a $100 budget and “the goal was to make it launch,” said MacLean, who lives in Alberta.

TheNo Net Brutalityfolks followed up by posting this on their web-site: 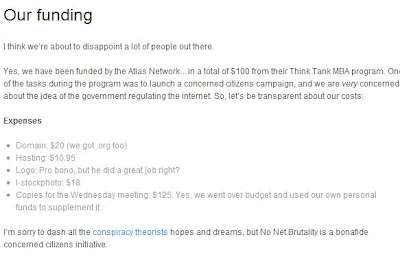 ….The presentation shown at the Miami conference says: “Our agenda is to stop the government from taking over the Internet” by making the public aware of the “negative effects of this proposal.” The students suggested targeting video game users and other potential allies through aTwitter account, aFacebook page, and a blog written in Chinese.

Look we all make mistakes, even blogs with almost unlimited resources because they are partially funded by George Soros. Heck I have gotten stories wrong.  The key is to own up to it and explain to your readers why you got it wrong.

Unfortunately that’s not what Think Progress did.  They forgot one of the most important blogging rule, when you are in a hole…stop digging. CNET Updated their story when they finally heard from the stories writer:

I’ve heard back fromLee Fang, the Center for American Progress blogger who wrote Tuesday’s article. Fang said in e-mail: “The purpose of these types of PR firms and front groups is to obfuscate who they are actually working for. All we know is that this presentation was given at a lobbyist meeting with [Americans for Tax Reform’s] Grover Norquist, then Grover Norquist and several telecom funded groups launched a new anti-Net neutrality bill/public campaign.”


Fang’s headline says this was the “Telecoms’ secret plan.” I asked him what reason he has to believe that AT&T, Verizon, and other such companies even knew that the student project existed, and I have not received a response. I’ve also asked a Center for American Progress spokeswoman,Suzi Emmerling, how much money the organization receives from Google, eBay, and Amazon.com, and she has not replied.

Update, 1:25 p.m. PT:Joseph Humire, an Atlas program manager, replied to say the actual judging in the student competition was held in Virginia, “but the participants did get a chance to showcase their campaigns in Florida.”

Talk about conspiracy theorists.  Even faced with the evidence that their story is wrong, the George Soros/John Podesta group just keeps on digging the hole deeper and deeper. Thank God, that is the way of the Progressives.