Obama's Fight Over Jerusalem, Its All Moshe Dayan's Fault 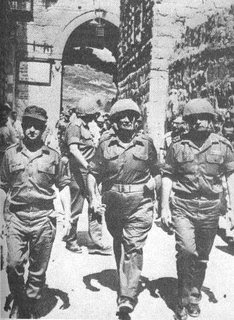 Tuesday night begins Yom Yerushalayim, Jerusalem Day. Celebrated throughout the Jewish world, it celebrates the day in 1967 that the IDF returned the Old Jerusalem to Jewish hands.

Jews were denied access to the Holy sites in the Old City Jerusalem since 1948, when Jordan took it over during the War of Independence. In the intervening 19 years the Jordanians waged systematic destruction, desecration and looting of Jewish sites.

But on that day 43 years ago,  a miracle 1900 years in the making occurred, a day of joy unlike any other, until it was ruined by “Hero” Moshe Dayan.

Even if you cannot understand the Hebrew in the recording below, you can understand the joy, and reverence as the radio broadcast  Jews Temple mount for the first time in nearly 20 years.

For those who don’t understand Hebrew, the below is a translation of the key passages of the broadcast.

Lt.- Col. Uzi Eilam blows the Shofar. Soldiers are singing ‘Jerusalem of Gold’.]
Uzi Narkiss: Tell me, where is the Western Wall? How do we get there?
Yossi Ronen: I’m walking right now down the steps towards the Western Wall. I’m not a religious man, I never have been, but this is the Western Wall and I’m touching the stones of the Western Wall.
Soldiers:Blessed art Thou Lord God King of the Universe who has sustained us and kept us and has brought us to this day]
Rabbi Shlomo Goren: Blessed are thou, who comforts Zion and bulids Jerusalem]
Soldiers: Amen!
[Soldiers sing ‘Hatikva’ next to the Western Wall.]
Rabbi Goren: We’re now going to recite the prayer for the fallen soldiers of this war against all of the enemies of Israel:
[Soldiers weeping]
Merciful God in heaven, may the heroes and the pure, be under thy Divine wings, among the holy and the pure who shine bright as the sky, and the souls of soldiers of the Israeli army who fell in this war against the enemies of Israel, who fell for their loyalty to God and the land of Israel, who fell for the liberation of the Temple, the Temple Mount, the Western Wall and Jerusalem the city of the Lord. May their place of rest be in paradise. Merciful One, O keep their souls forever alive under Thy protective wings. The Lord being their heritage, may they rest in peace, for they shalt rest and stand up for their allotted portion at the end of the days, and let us say, Amen.]

Since that day in 1967, the Muslims have been trying to reclaim Jerusalem’s Holy Sites, not because of any ‘religious ties” but to de-legitimize the Jewish claims to the city. During the past twelve months, President Barack Obama has joined in on the efforts to de-legitimize Jewish Heritage. The sad part of Israel’s struggle to retain her capital is that it might not have been so fierce if Moshe Dayan didn’t give away the Temple Mount almost 42 years ago.

When Israel gained possession of the Temple compound during the Six Day War, Prime Minister Levi Eshkol wanted to create a multi-faith council to run the compound. The Muslim Mosque would not have been touched, but all faiths would be allowed up on top of the mount.

Dayan thought the Temple Mount should remain in Muslim possession. In his biography Dayan clearly stated that the last thing he wanted was the Beit Hamikdash(the Jewish Temple) rebuilt. So Dayan “gave” the Temple Mount back to the Arabs because he wanted to make sure that there wouldn’t be a third Temple. There was nothing that Prime Minister Eshkol could do about it, after all Moshe Dayan, was a war hero.

It would have so much extra meaning if on Tuesday Night Israel could celebrate Yom Yerushalayim with a beautiful ceremony where the two Temples stood, on top of the Temple Mount, but that isn’t possible because of Dayan.  Thanks to the General, only Muslims are allowed to pray on top of the Temple mount.

The Jewish people have lost possession of the the Temple Mount three times since King David purchased the site 30 centuries ago. Only once, was the site given away voluntarily, when Moshe Dayan gave it away 43 years ago. Moshe Dayan will go down in history not as a hero, but as the man who gave away the Temple Mount, providing Barack Obama and the Muslims the opportunity to make Jerusalem an Issue:

……….”It’s true,” Eldad said, “that the original sin was when the Jewish People, immediately after the Six Day War in 1967, ceded its hold on the Temple Mount in an unholy alliance between the Chief Rabbinate and Moshe Dayan – each side for its own reasons – but now the danger is that the Arab sovereignty on the Temple Mount will spill over to the Western Wall plaza, and from there to other places.”

Then-Defense Minister Dayan, just days after Israel’s liberation of the Old City, informed the Muslims running the Temple Mount that they could continue to run the mosques there – and later went further by preventing Jewish prayer all over the Mount.

“It was evident that if we did not prevent Jews from praying in what was now a mosque compound,” Dayan later wrote, “matters would get out of hand and lead to a religious clash… As an added precaution, I told the chief of staff to order the chief army chaplain to remove the branch office he had established in the building which adjoins the mosque compound.”Source Israel National News