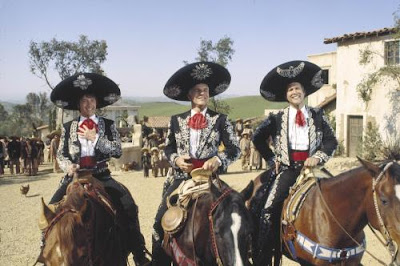 When looking at the President’s Marxist past, most people focus on Bill Ayers, the unrepentant terrorist who was described by the President as “just a guy from the neighborhood.”  Actually the Obama, Ayers “duo” was actually a threesome:the future president, Bill Ayers and Mike Klonsky.

Klonsky has rarely been mentioned since the election, but perhaps we should be looking at his past influence on the president.

Klonsky is the former National Chairman of the Students for a Democratic Society. In 1968 he penned a document titled “Toward a Revolutionary Youth Movement. ” Think of it as a “love note” to Chinese dictator Mao Zedong. It called for  “an organized class-conscious youth movement” to engage in “revolutionary struggle” to “expose war, racism, the exploitation of labor, and the oppression of youth.” Klonsky concluded that “racism is an inherent part of capitalism and a primary tool used to exploit all working people.”

Klonsky did not join his buddy Bill Ayers, when he broke away to form the Weather Underground. Instead he founded the “October League,” a Maoist organization that changed its name to the “Communist Party (Marxist Leninist)” (CPML) in June 1977.

Old Student Communists do not die,  they earned a doctorate and become a professor of education at the University of Illinois at Chicago. Klonsky joined old buddy Bill Ayers on that career path.

In 1991 Klonsky and Ayers co-founded a project known as the “Small Schools Workshop” (SSW), premised on the notion that if high schools were to limit their enrollment to no more than 400 students (and optimally to fewer than 200), the learning atmosphere on campus would be improved. Klonsky has served as SSW’s director since 1993.  That’s where the future President comes into the picture.

Barack Obama and Bill Ayers worked together on the Chicago Annenberg Challenge (CAC).  Obama chaired the board that oversaw funding decisions and directed over one million dollars worth of grands to the Klonsky directed organization., CAC gave SSW a series of grants totaling $1,056,162. But that’s not all, the  Joyce Foundation and the Woods Fund of Chicago, (Obama also sat on both boards), gave SSW another $912,556. 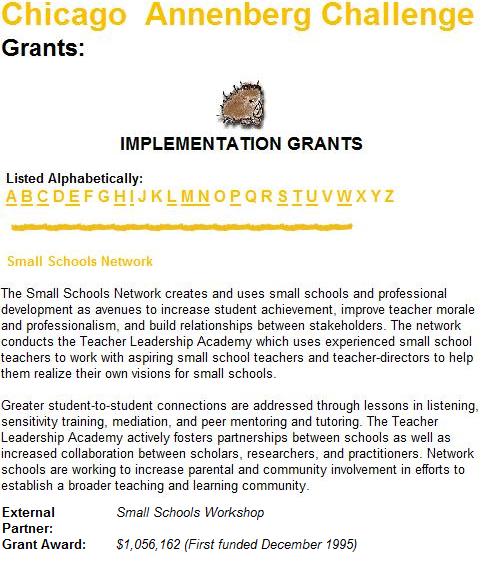 The future President’s relationship with Klonsky and Ayers went beyond the guilt by association cries of Obama supporters. Documents uncovered by the Blog Verum Serum in October 2008,  shows that Barack Obama’s Annenberg Challenge and the Small Schools workshop shared the same floor in the same building

According to this letter dated 1995, Obama’s office was on the 3rd floor:

And according to this memo dated 1996, Small Schools Workshop was also on the 3rd floor:

As the Co-creator of the SSW, Ayers office was right next to Klonsky’s on the same floor as  the future President. On the same floor and sharing money, does anybody truly believe that the three amigos never had any interaction?

Nothing has changed, at least with Ayers and Klonsky. In a 2001, the Maoist was interviewed for  the Chicago Tribune. There he said he and Ayers were still pursuing the same radical agendas they had advocated in their younger days. “We’ve learned how to work within the system,” Klonsky said. “The fight to save and improve public education embodies all the issues we were fighting for back then.”

The President’s relationship with Klonsky continued well into his campaign for President. Klonsky was even given page on Barack Obama’s campaign site discussing education and social justice. 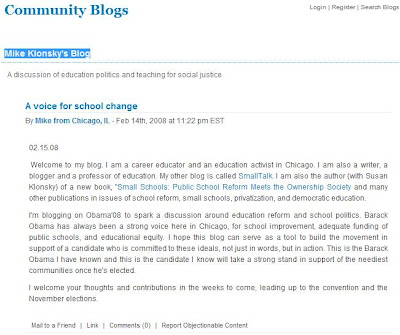 That was until the blog Global Labor and Politics started writing about the Obama/Klonsky relationship that was when Klonsky’s blog was mysteriously removed from the site (but thankfully some of them are available through webarchives).

That’s where the trail drops off. All mentions of Klonsky have been scrubbed from Obama’s website, and there are no public sources which report that the relationship is ongoing.

Either way the fact is that the future president  promoted and collaborated with these anti-American radicals. He worked in close quarters with them, and was responsible for almost $2 million dollars of donation to their organization. Klonsky even wrote for Obama’s campaign until he was exposed. With that long and close association, it would be hard to believe that the Three Amigos, Obama, Ayers, and Klonsky did not also share ideology.