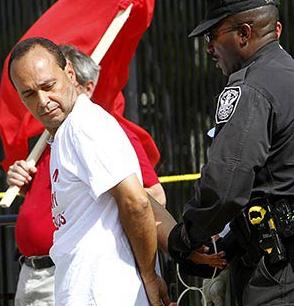 Rep. Luis V. Gutierrez (D-IL) made a big show of getting arrested in front of the White House to protest the Arizona law created to enforce immigration laws. Of course the entire arrest was a publicity stunt set up before hand.

Douglas Rivlin, a Gutierrez spokesman. said Gutierrez had given U.S. Park Police a “heads-up” earlier in the week that he planned to join the demonstrators “as a courtesy.” He said Gutierrez expected to get arrested and at the time of the arrest was wearing a shirt that said “Arrest Me Not My Friends.” Rivlin described the arrests “as very peaceful” and said Gutierrez “was very excited” about being arrested.

While it is positive that there was no violence at the rally, Gutierrez’s arrest seems more like a publicity stunt than an act of civil disobedience.  It makes one wonder if he really objects to  protesting enforcing immigration laws, why wouldn’t he participate in a real protest, instead of wasting his time with something that was so obviously a case of AstroTurf?

One possibility is that he is trying to distract voters away from certain issues that have arisen, that shows the Congressman is not necessarily ethical in all that he does.

For example in October of 2008  Gutierrez wrote to Henry Paulson, about Banco Popular a bank based in Puerto Rico.  In an Oct. 20th  letter, Gutierrez portrayed the bank as a special case in need of an urgent rescue.

“Obviously, it is in the best interest of the U.S. Government and Puerto Rico that Popular continue providing services to maintain a safe and sound financial system,” Gutierrez wrote in the letter, obtained by The Hill under the Freedom of Information Act.

Funny that Gutierrez forgot to mention in his letter, that he has received almost 15 thousand dollars  worth of campaign contributions from the bank during his congressional career, or that his wife was a Senior Vice President of the bank until 2007.

Here’s another fun fact that Gutierrez may not want to become widely distributed, he can’t even vote for himself, he moved out of his Congressional District two years ago:

The U.S. Constitution doesn’t require congressmen to live in the districts they represent. The only residency requirement is this: They have to live somewhere in the state from which they are elected.

It’s not unusual for congressional candidates to live outside the district they want to represent. Typically, those who do promise to move to the district if elected. But it is unusual for a congressman to move out of his district.

Gutierrez and his wife, Soraida, moved out of his 4th Congressional District about two years ago, after buying a condo at 3963 W. Belmont — in Quigley’s congressional district. Gutierrez changed his voter registration to that address in August 2008, which means he couldn’t vote for himself in November 2008 when he was re-elected to a ninth term.

Speaking about Gutierrez and housing, the Chicago Sun-Times that his daughter may have gotten a sweetheart deal on her home in Chicago.

Gutierrez was the mentor of former Chicago ward-26 alderman Billy Ocasio, who initiated specialized affordable-housing programs in his district. With a $140,000 loan from her parents, [Gutierrez’s Daughter Omaira] Figueroa bought her new two-bedroom, two-bathroom affordable condo in Humboldt Park in June 2008 for $155,000, property records show.

Little more than a year later, she sold it for $239,900 — $84,900, or 55 percent, more than she’d paid. Had Figueroa’s condo been part of a typical affordable-housing program, that wouldn’t have been possible. City of Chicago rules, for instance, now bar affordable-housing buyers from turning big profits when they resell. The rules also require that affordable homes remain affordable — they can be sold only to buyers who meet income-eligibility guidelines.

But Ocasio says that Figueroa purchase was a 26th Ward “community” initiative that “wasn’t an official government program.”

While both the Ocasio and Gutierrez say there was no favoritism  in the deal, the facts make that claim questionable.

In another Sun-Times story, we learn that Gutierrez may have illegally helped his daughter get a State job:

Omaira Figueroa became a consumer counselor for the Illinois Commerce Commission in June 2004, after Blagojevich aides included her in the then-secret hiring database under a spreadsheet labeled “Gutierrez, Luis (CONG-D-4th Dist.)”

“There should be no issues. She should get a letter offering the position in about 2 weeks,” according to a note placed in the database the month before the ICC hired her.

A U.S. Supreme Court ruling bans politics from factoring in to most state hiring, including the job held by Gutierrez’s daughter. But that didn’t keep the since-indicted Blagojevich from tracking 386 clout-heavy people who sponsored 5,700 candidates for state jobs, transfers or promotions, according to the records, which list Gutierrez as sponsoring 36 people.

Not to be outdone, the Chicago Tribune is reporting that the FBI is snooping around Gutierrez’s real estate deals:

The FBI has interviewed City Hall employees and Chicago aldermen about U.S. Rep. Luis Gutierrez’s ties to a corrupt developer, according to records and interviews that raise new questions about the congressman amid an ongoing federal investigation.

A former alderman convicted in the investigation told FBI agents that Gutierrez boasted of helping his longtime political supporter Calvin Boender obtain a lucrative zoning change for a development on the city’s West Side. Another alderman told agents this year she thought Gutierrez was going to buy a home in the development.

And several city planners told investigators they were stunned by the highly unusual intervention of a congressman in a local zoning matter.

The FBI asked about Gutierrez as recently as February, but most of the inquiries occurred during 2008, the Tribune has learned, as federal authorities prepared their bribery cases against Boender and former 29th Ward Ald. Isaac “Ike” Carothers.

The newly disclosed details, coupled with the revelation at Boender’s March trial that Gutierrez met with Mayor Richard Daley on Boender’s behalf, undermine the congressman’s earlier assertions that his involvement was “extremely minimal.” The Tribune has previously reported that Boender loaned Gutierrez $200,000 months before the congressman began pushing Daley to support Boender’s venture.

The Congressman isn’t new to scandal, although these charges may be the most serious. Back in 2005, Ed Morrissey  wrote about Gutierrez’s nasty habit of tardy travel expense reporting for trips involving:

Mr. Gutierrez reported a “fact-finding and educational” trip to Taiwan in 2001 that cost the Chinese National Association of Industry and Commerce about $8,600, records show. That same year, he went to Puerto Rico and Los Angeles to participate in an immigration rally and other events as the guest of the Service Employees International Union – a trip that cost about $3,700, records show. Mr. Gutierrez also made trips to Guadalajara and Acapulco in Mexico, to Amman in Jordan and Tel Aviv in Israel, as well as to less exotic destinations like Tampa, San Antonio and Phoenix.

Congressman Gutierrez has a lot going on in his life, helping banks that are campaign donors, moving to a new home further away from his job, helping his daughter get both a job and a house, and now an FBI investigation.  The poor man must be dead tired. No wonder why he took a few hours off to go to a fake protest by the White House, followed by a nice ride in an air-conditioned Police Car.

The Congressman seems so tired, that voters of the 4th Congressional District should look very closely at all the doings around him and give strong consideration to voting him a nice vacation in November.