If you enjoyed the lack of transparency shown by the Senate when crafting their version of Obamacare, you will love the way they plan on crafting the Cap and Trade legislation. Instead of introducing the bill and sending it to committee, future Nevada Senator Emeritus, Harry Reid is taking over the process. Just as he did during the Obamacare process, Reid will be taking the bill drafting process behind his closed office doors for the deal making.

Next week, Reid will be handed the reins of the bill to cap greenhouse gas emissions while expanding domestic oil, gas and nuclear power production. His challenge could not be tougher…

In an effort to keep the bill in Reid’s hands, the sponsors — Sens. John Kerry (D-Mass.), Lindsey Graham (R-S.C.) and Joe Lieberman (I-Conn.) won’t officially introduce the bill in the Senate when they unveil it to the public next week.

“If we introduce it, it’ll get referred to committees,” Lieberman said. “We want him to be able to work with it and bring it out onto the floor as a leader whenever he’s ready.”

There are those who hope that Joe Lieberman switches parties when he has to run for reelection in 2012. His cooperation with this secrecy effort is a good indication of why the country would be better off if Joe stayed in his own (Democratic) party and was defeated by a Republican.

Already, some senators also are raising red flags about the committee process, which they warn may be circumvented if the Kerry-Graham-Lieberman proposal moves directly into Reid’s office.

What Senator Cantwell is forgetting is a committee process would make it much harder to insert provisions like the “Corn Husker Kickback” inserted into the Obamacare bill.

Budget Committee ranking member Judd Gregg (R-N.H.), a possible swing vote, said he would prefer the committee process remain intact for the energy and climate bill — rather than shifting the debate into Reid’s office. “This concept of going through the leader’s office is a new concept in the legislative flow chart,” Gregg said.

Speaking on the Senate floor yesterday, Sen. Byron Dorgan (D-N.D.) repeated his call to move to floor debate on S. 1462, the “energy only” approach “There are not a lot of weeks left in this legislative session, and my fervent hope is, I would say to those who have been working on climate change and blocking our ability to bring an energy bill to the floor of the Senate, I hope perhaps we could find a way to work together to bring the energy bill to the floor,” Dorgan said. “That’s the way the Senate works. The Senate works by running things through a committee.”

Senate progressives are looking for every opportunity to circumvent dissent and to do an end-around the Committee process. It certainly is not the openness and transparency we were promised in 2008. Transparency is no longer important to the progressives, now its all about checking off more items from their agenda before the 2010 elections when they will once again be forced to negotiate compromises with the GOP. Until then, they were able to  cut deals behind closed doors in the case of Obamacare, and while they caught some hell, in the end they were still able to shove  health care down our throats. Now they are following the same road map for cap and tax legislation. 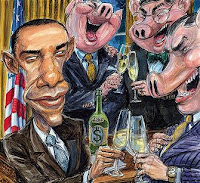 That old stereotype of politicians working in “smoke-filled” backrooms are becoming the new normal (without the smoke). Just as it was during the Obamacare process, this is an affront to the promises of transparency promised by the President during the campaign. It is a corruption of the way our government was outlined by our Founding Fathers. Power, they said, was to be in the hands of the American People, not in the back rooms of the Senate Majority Leader’s office.

New Poll Is Absolutely Brutal for Biden
Townhall
There's a fresh twist in story of 'The View' co-hosts who left the air due to positive Covid tests ahead of VP interview
Twitchy
The FBI Admits to Having Informants at January 6th Protest
Redstate
It Gets Worse: Look Who Worked Together to Frame Donald Trump With Fake Russia Hoax
PJ Media