The Hypocrisy of Congressman Ron Paul

Ron Paul has rarely been on my radar. Sure there were the anti-black/ anti-Semitic Newsletters which were published under his name (which he claimed he never read). And yes there were those really whacko public statements like; the federal reserve was behind Watergate, that Lincoln was wrong to push us into a Civil War over slavery, or his assertion that condemning the HAMAS terrorist rocket attacks promotes violence. But those items only suggest that the Texas Republican Congressman is a bigot as well as a bit of a lunatic, which not bad by today’s congressional standards.

Ron Paul is believed to be a “fiscal conservative” and if you ask him he will tell you that he has never voted for an earmark. That statement is 100% correct. What Paul does is to make sure that the earmarks he wants are put into a bill, and then he votes against the bill. Its the best of all possible worlds. He gets to bring home the bacon on a local basis and makes the anti-earmark claim on a national basis. 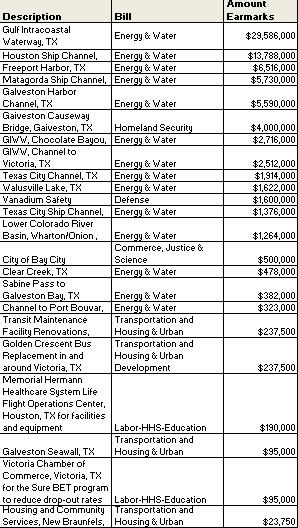 CAVUTO:Congressman, the rap is that you’re a porker, that — that a lot of pork, $73 million-plus, went to your district. Is that true?

REP. RON PAUL, R-TEXAS: Well, it might be. But I think you’re missing the whole point. I have never voted for an earmark. I voted against all appropriation bills. So, this whole thing about earmarks is totally misunderstood.

The Congressman believes that the earmarks are just fine as long as he is open about them. It reminds one of the Gangster Big Julie, a character in the musical  Guys & Dolls, who best line in the play was

“Well, I used to be bad when I was a kid, but ever since then I’ve gone straight, as has been proved by my record: Thirty-three arrests and no convictions!”

These earmarks may very well be legitimate programs, but by specifying the location and the recipient of the program there is no thought given to “is this the most efficient place to house this program?” Money can be sent to a place that does not have the best resources or personnel to implement the earmark, causing a program to be more expensive than if it were done in someone district of a different congressman.

Paul may be very transparent about the hypocrisy of requesting an earmark then voting against the bill (because he knows it will pass), but his twisted logic doesn’t make it any less hypocritical.

Whenever I post something negative about Ron Paul (which is just about every time I post about him), I get the NASTIEST comments and emails. He doesn’t have a lot of supporters but those that do are very well organized and support him do so with a passion. When I saw them at CPAC, Paul supporters reminded me of those wide-eyed cult members that used to panhandle at airports.  That wasn’t particularly bothersome, after all people should have some passion. Problem is Ron Paul does not represent himself truthfully. Along with his history of being a “drooling crazy” type and a bigot, the man is the typical Washington DC spin-master, saying one thing but doing another. He has a good script but frankly we have all seen that movie before and it got old a long time ago.