Obama's New Drilling Plan: A Combination of Lies and Sleight of Hand 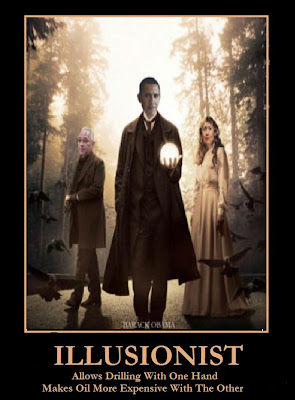 The President started off his announcement with a lie.  He said that the US only has about 2% of the world’s oil reserves.The Congressional Research Service (CRS) has light on the true picture of America’s energy resources. The comprehensive assessment looks beyond the Energy Information Administration’s estimates of proven reserves to include government estimates from the U.S. Geological Survey and the Minerals Management Service to include America’s recoverable oil resources from areas both accessible and inaccessible to drilling. The results show the U.S. endowment of recoverable oil to be 167 billion barrels of oil, not 21 billion – nearly eight times higher than the number pedaled by Democrats. Remarkably, 167 billion is the equivalent of replacing America’s current imports from OPEC countries for more than 75 years.

President Barack Obama is to announce Wednesday a plan to permit exploration for oil and natural gas off the coast of Virginia as a way to create jobs and reduce U.S. dependence on foreign oil.

Obama, who wants Congress to move a stalled climate change bill, has sought to reach out to Republicans by signaling he is open to allowing offshore drilling, providing coastlines are protected.

Joined by Interior Secretary Ken Salazar, Obama is to detail an updated plan for offshore oil and natural gas drilling in remarks at a military base in nearby Maryland.

For more than 20 years, drilling was banned in most offshore areas of the United States outside the Gulf of Mexico because of concerns that spills could harm the environment.

The administration has been weighing the pros and cons of offshore drilling since it took office and put the brakes on a Bush-era proposal which called for drilling along the East Coast and off the coast of California.

An administration official said, as part of the new plan, Interior will conduct the first new offshore oil and gas sale in the Atlantic Ocean in over two decades as part of a lease sale 50 miles off the coast of Virginia.

Seismic exploration in the south Atlantic and mid-Atlantic Outer Continental Shelf of the United States will determine the quantity and location of potential oil and gas resources to support energy planning.

Don’t get too excited as you may remember in January the Interior Secretary Salazar announced new regulations to slow down the process of exploiting our oil reserves. Under the new procedures announced by Salazar, Interior staff will conduct more detailed reviews of whether development would be harmful to lands and wildlife, including more on-the-ground visits.

The policies also pare back waivers from environmental analysis for some oil and gas activities that were authorized under a major 2005 energy law, and emphasize leasing in already-developed regions rather than new areas. The new policies will affect leasing and development decisions in energy-rich states where the federal government is a major landowner, including Colorado, Utah and Wyoming.

It is expected that exploration to be announced today will face similar delays by the Interior department, as the object of this announcement is to give the President political cover for what will be coming later in the week

Here’s a look at what the President is doing with the other hand:

Proposed oil and gas leasing in Alaska’s Bristol Bay will be canceled out of concern for protecting sensitive areas of the Outer Continental Shelf from environmental dangers.

This could affect companies like Royal Dutch Shell which has expressed interest in the region, as well as Conoco Phillips, BP and Statoil.

Four pending lease sales in the Chukchi and Beaufort Seas in North Alaska will be canceled and those areas reserved for future scientific research to determine if they are suitable for further leasing. At the same time, a previously scheduled lease sale in Alaska’s Cook Inlet will proceed.

And here is the “kicker.” While the President will try to get the nation cheering about all of that new drilling (as if it will happen right away) his EPA will be ramping up the price of energy in a huge way.

Tomorrow, April 1, is the date the EPA is expected to announce all of its new regulations based on its declaration that CO2 is a pollutant.  These new regulations will be a back door energy tax that will not only kill jobs, but tax every American who turns on a light drives a car or warm their house. They will drive up the cost of consumer goods and drive jobs over sees as the new regulations will increase the cost of manufacturing products in America.

This action will hurt the middle class more than any other group. The rich will be able to afford the higher costs for goods and energy. Under an Obama administration the Poor will probably receive subsidies to help them afford the inflated costs. It the middle-class who can neither afford nor receive aid that will be most burdened by Obama’s intentional energy inflation.

Along with his Diary here at Redstate, Jeff Dunetz posts 5-6 times a day at his blog The Lid