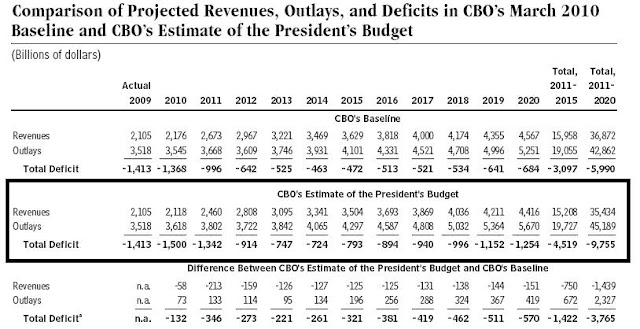 The Congressional Budget Office has revised its scoring of the 2011 budget submitted by President Obama. This version is very similar to the one released earlier this month, with some minor adjustments.

This projection should serve as a warning that the United States faces real economic trouble. Based on their numbers the United States will be running an annual deficit of approximately  $975 Billion Dollars/Year. This doesn’t even include Obamacare which according to a new Republican projection will add another $64 Billion/year to the deficit.

To put that into perspective, during the heavy spending Bush years the highest deficit was $459 billion dollars. Once Barack Obama became President, and was able to get his hands on the second half of the 2009 budget, deficits started exceeding the trillion dollar level. Obama’s budget above makes the trillion dollar figure seem common place.

CBO’s analysis indicates that if the President’s proposals were enacted:

In sum, CBO’s analysis of the interactions between the budget and the economy indicates the following:

Unless our government does something drastic to cut the annual deficit, the United States will find itself as a nation in perpetual servitude to the countries holding its debt.