If a sports columnist like Tony” Kornheiser gets suspended for making fun of a colleague’s clothing, shouldn’t CBS White House Correspondent Mark Knowler be fired for describing the people who showed up to protest the Obamcare bill with a sexual slur?
Approximately 30,000 people showed up at the Capitol yesterday to protest the Progressive/ Democratic Party attack on Amercan Freedom. The most incredible part of this rally is that it was put together in less than two days. 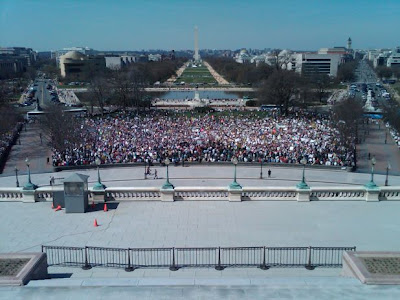 The Mainstream Media of course gave their usual skewed version of the rally.

The Washington Post started by reporting that there were “hundreds” at the rally, but when they were confronted with pictures showing the truth they changed it to thousands.

Later The Washington Post, ABC and CNN all based their entire story one or two nuts who may or may not have said stupid things to Congressman Lewis and Congressman Frank. To those “News Organizations” those few jerks was the only thing important coming out of the rally.

Clyburn owes those protesters some more specific allegations. I spent a few hours with them today and saw a very different picture. There are nuts and racists in a lot of crowds, but the signs and their conversations and their chants today have largely (actually, I saw zero racism and exactly one “long form” birth certificate sign) covered these things up extremely well if Clyburn has their number.

It seems that ugly crowd of protestors harassing members of Congress in the Capitol complex this afternoon got even uglier than we thought. As noted earlier, in addition to menacing behavior toward multiple members of Congress, one protestor called Rep. Barney Frank a “faggot”, a taunt greeted by laughter from fellow protestors.

That’s shameful, uncivil, and wrong. And in my experience there unrepresentative.

Kerry Picket of the Washington Times reports, maybe those reports of racism are not exactly true:

Democrat, claims that tea party protesters today hurled racial slurs at fellow CBC member Rep. John Lewis, a Democrat from Georgia. Mr. Carson said that “hundreds of people” were chanting “kill the bill” and he heard “at least 15 times” the “n – word” being thrown around.

“It just happened on the way to votes. Coming out of [Cannon]…John Lewis’ chief of staff came with us. It was just the three of us walking down the steps. ‘Kill the bill, Kill the bill…n-word, fifteen times.“

Missouri Democrat Emanuel Cleaver, a black congressman from Missouri, claimed he was spat on by a protester. Mr. Cleaver’s office reportedly said Capitol Hill Police arrested the protester, but Sgt. Kimberly Schneider of the U.S. Capitol Police said in an e-mail to the L.A. Times: “We did not make any arrests today.”

A U.S. Capitol Police spokeswoman said she was unaware of any law enforcement inquiry into the incidents.

The Washington Times caught up with several health care bill protesters, all black individuals, and asked their thoughts on the allegations regarding the racial epithets.

Bill Owens Jr. a Tea Party Express leader from Las Vegas said he did not experience or witness any racial hostility.

“I had a chance to be among these people. It’s not about pigmentation. You have race issues going on all the time, however, I’m not seeing anything significant from these rallies. It’s just not there,” he said. “Does a person find a racist once in a while?….Sure you find that anywhere. These people are concerned about the issues of where you stand not what color you are.”

First of all Mr. Knoller this was a Code Red protest, not a Tea Party protest, but to know that you would have had to do your job and understand the story. And don’t say you didn’t know what the term meant, because its been in the news for months. So you were either using a sexually loaded term, or you didn’t do your job, either way, CBS should kick your arse to the street.

What is the problem with these supposed reporters. Why is it so abhorrent to them that American Citizens express their displeasure of a Congressional action to take away another piece of our freedom?

John Kerry Is Failing As Climate Czar. This Is Why.
Townhall
Ted Cruz asks Richard Blumenthal a simple question about African American voter participation, and Blumenthal's answer 'speaks volumes' [video]
Twitchy
A New Poll out of Virginia Is Five-Alarm Territory for Democrats
Redstate
The Morning Briefing: Biden's Fake Presidency Could Wreck the Dems For a Long Time
PJ Media