Obamacare Bill Turns the IRS Into the Secret Police 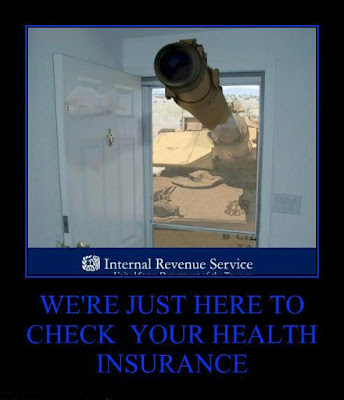 No three letters strike fear in the hearts of Americans that I-R-S.  According to a new report by the GOP members of the House Ways and Means committee, If the Senate Obamacare bill gets passed by the house,  the IRS is going to gets a lot more intimidating because it is going to get a slew of new responsibilities. They will act as Barack Obama’s not so secret health insurance police.

“If the Democrats’ health care bill becomes law, the IRS could have to hire more than 16,000 additional agents, auditors and other workers just to enforce all the new taxes and penalties,” said Ways and Means Ranking Member Dave Camp (R-MI).  “It is a dangerous expansion of the IRS’s power and reach into the lives of virtually every American.”

Under the Individual Mandate Tax (IMT) provision in the bill, the part that forces you to purchase Obamacare whether you want it or not, the progressive Democrats make the IRS the chief enforcer for a new government-run health insurance system.

The IRS would be in charge of verifying that every American taxpayer has obtained acceptable health coverage for every month of the year. If the IRS determines that a taxpayer lacks acceptable insurance for even a single month, then the IRS would impose a
new tax on that taxpayer, even auditing the taxpayer and could assess interest and penalties on top of the tax. This is an unprecedented new role for the IRS – one that will inject the federal government even further into the lives of American families. The bill also gives the IRS some new “teeth” to strike fear in the hears of the people with, including:

And then the pièce de résistance:

The report warns of the danger of giving the IRS double duty:

The 2009 National Taxpayer Advocate’s report to Congress includes an extensive and ominous discussion on the risks and challenges involved in running social programs through the tax system. The report expresses concern that the IRS has neither the mission nor the expertise to perform such tasks.

“When social program delivery is grafted to traditional IRS activities,
there arises a potential conflict with the IRS’s traditional mission [of revenue collection],” the report states.

The Taxpayer Advocate discusses these concerns in the context of refundable credits such as the earned income tax credit, but the analysis is especially timely considering that the IRS could soon be responsible for administering large portions of the nation’s health care system – a social program that dwarfs any of the existing refundable credits.

The IRS’ new powers will simply be another loss of freedom from the folks who brought you “hope and change.”

Clean House in 2025
Townhall
Group has liberated land to be a city for colonized people only; No rent, no kkkops, rona or colonizers allowed
Twitchy
Liz Cheney's Removal as GOP Conference Chairwoman Is Part of Her Strategy to Win Re-Election to the House
Redstate
The Morning Briefing: The Democrats Want Your Ammo and Your Freedom
PJ Media