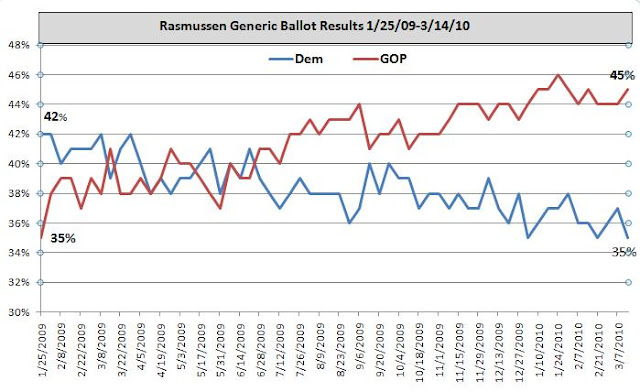 More foreboding news for the Democratic Party as Rasmussen’s weekly look at the generic congressional ballot shows the GOP increasing their lead to 10%. 45% of voters would go for their district’s Republican congressional candidate while 35% would opt for the Democratic. This is the largest lead since President Obama was inaugurated.

The first poll after the inauguration had the Democratic party with a 7% lead meaning that there has been a 17% trade off in only 14 months. Additionally those picking neither party has dropped slightly from 23-20%.

The generic ballot is a great way to show American Voters disapproval of the Obama agenda.  The Democratic lead started do whither away in late February/Early March 09, just around the time porkulus was passed, in late June when the House passed cap and trade the GOP began to surpass the democrats and in the end of September/early October when the town halls were over and America began to realize that congress was going to ram health care down their throats the GOP advantage widened.

Democrats who currently control both the House and Senate are vowing to pass their national health care plan with a vote in the House possible by the end of this week. But 53% oppose the plan currently working its way through Congress, including 46% who strongly oppose it. Forty-three percent (43%) favor the plan, with 23% who strongly favor it. Support for and opposition to the plan have been largely unchanged since just after Thanksgiving. Fifty-seven percent (57%) say passage of the health care reform plan will hurt the U.S. economy.

Voters not affiliated with either major party continue to favor the GOP by a 41% to 22% margin, showing little change for several months now. In February, the number of unaffiliated voters nationally increased by half a percentage point to 32.9% while both Republicans and Democrats lost further ground.

Congress’ top leaders are feeling the heat from voters this month, as separate polling shows that three of the four reaching or matching their highest unfavorable ratings of the past year.

Voter unhappiness with Congress has reached the highest level ever recorded by Rasmussen Reports with 71% now saying the national legislature is doing a poor job.

Voters continue to rate the economy as the most important issue regularly tracked by Rasmussen Reports, but the issue of government ethics and corruption takes near equal status this month.

Thirty-four percent (34%) of Americans expect the unemployment rate in the United States to be higher a year from today. That marks a five-point increase in pessimism from December.

Republicans are now trusted more than Democrats on eight out of 10 key issues regularly tracked by Rasmussen Reports, but the gap between the two parties has narrowed on several of them.

A sizable majority (65%) of voters think politics in the nation’s capital will become more partisan over the next year. That’s a 13-point jump from the 52% who felt that way just after Obama’s State of the Union speech in which he talked about trying to work with Republicans.

Overall the polls continue to reflect voter rejection of the Obama progressive agenda.

You Can Find More of Jeff Dunetz’s Writing at his Blog, The Lid