The UN’s Human Rights Council (HRC) is a perfect example of what is wrong with the United Nations, at best it us a joke, at worst it does more to harm human rights than to protect those being abused. The council is a great example of the lunatics running the asylum, it is loaded with human rights violators. Last night, when the State Department released its most recent analysis of the human rights situation in the countries of the world, nearly half of the countries (22 out of 46) on the UN’s HRC were described as being serious human rights violators including: 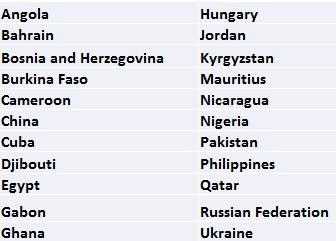 Astoundingly, at the same time as the report’s release, Secretary of State Hilary Clinton announced that the United States is going to submit criticism of our own human rights record to the HRC. The most free nation in the world is going to apologize to this Kangaroo Court of tyrants and bigots.

“Human rights are universal, but their experience is local. This is why we are committed to holding everyone to the same standard, including ourselves,” Clinton told a press briefing at the State Department, where she unveiled the “2009 Country Reports on Human Rights Practices.”

Clinton said the U.S. is now gathering facts on its own record because – as a member of the U.N.  Human Rights Council – it is participating in the UNHRC’s “universal periodic review” process.

And we are going to let other people make the analysis”

“In the fall, we will present a report (to the UNHRC) based on the input of citizens and NGOs, gathered online and in face-to-face meetings across the country attended by senior government officials,” Clinton said on Thursday.

“Assessing opportunities for progress and soliciting citizen engagement is one way that we demonstrate our commitment in word and deed to the basic principles that guide us toward a more perfect union and a more peaceful world,” she added.

Following Clinton’s remarks, Michael Posner, assistant secretary for democracy, human rights and labor, took questions from reporters. One asked how the U.S. would defend itself against critics who say the U.S. “does not have clean hands, particularly when it comes to the criminal justice system.”

“I doubt that other governments are going to say things that people in this society don’t say every day,” Posner said. He reiterated Clinton’s commitment to preparing the first-ever report on the U.S. human rights record for review by the HCR.

Posner said the State Department is holding a series of meetings around the country to gather information it will use for the 20-page report it plans to submit to the Geneva-based United Nations Human Rights Council in November.

“We’re going to spread out to the border areas,” Posner said. “We’re going to go to Detroit. We’re going to talk to people in this society who are on the front line of criticizing, whether it’s the criminal justice system, immigration policies or national security policies — no holds barred,” he said.

“We’re going to hear them,” Posner said. “We’re going to incorporate their thoughts and suggestions into a report to the U.N. And then we’re going to show up at the end of the year and present that report and get comments from other countries.”

But Austin Ruse, president of a United Nations watchdog organization, the Catholic Family and Human Rights Institute, said the State Department’s process for preparing its report to the UNHRC may not be objective.

“It will give pretty left-wing groups a forum for criticizing the U.S.,” Ruse told CNSNews.com. That internal criticism will then end up at the U.N. Human Rights Council.

“This is a two-step process,” Ruse said. “The second step is another opportunity for the U.S. to come under fire, this time by the United Nations.”

This “review” will simply be another forum for the Obama administration to bash the United States in front of the world. And in this case it will not only be in front of the world but in front of the most serious human rights violators in the planet. This is the kind of change Barack Obama really meant when he ran for president, tearing down the Image of his country.

It Sure Looks Like CBS News Edited Body Cam Footage to Omit a Key Frame in Adam Toledo Shooting
Townhall
'Journalism...ish': The Oregonian deletes 'poorly worded' tweet on the police-involved shooting of a 'white male in his 30s' in Portland park
Twitchy
Men Are Getting Tired of the Hyper-Sexualized Woman
Redstate
Joe Biden a No-Show to Greet Japanese PM—and the Preview of a President Harris Is Awful
PJ Media