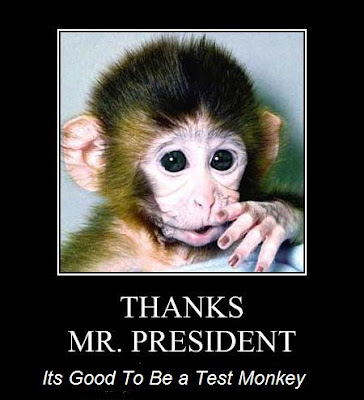 Ah … its good to be a monkey (at least in North Carolina).  The Civitas Institute took a look at the stimulus projects in its home state and there  some real whoppers. Like the research project to study he effects of cocaine on monkeys, or a half a million dollars to sell the benefits of the stimulus plan, or my personal favorite , a quarter of a million dollars to preserve a bug collection.

1. Study of monkeys using cocaine:  $71,623
Wake Forest University was granted money to “study the effects of self-administering cocaine on the glutamate system on monkeys.” Well, at least the monkeys will be stimulated.

3. Reducing hot flashes through yoga: $147,694
Funds granted to Wake Forest University to study “preliminary data on the efficacy of integral yoga for reducing menopausal hot flashes.”  The President warned us that the stimulus plan was needed to avoid an economic “catastrophe.” How does this study help revive the economy?

4. Collecting, researching and reporting on the stimulus act: $115,000; $150,000; $227,940 Total: $492,940
Nearly half a million taxpayer dollars will go toward funding more propaganda selling the “benefits” of the stimulus plan. The federal government created the Recovery Accountability and Transparency Board, while North Carolina established the Office of Economic Recovery & Investment for these very purposes. Apparently, that’s just not enough propaganda.

5. Create interactive dance performance technology: $762,372
This grant to UNC-Charlotte will fund the development of computer technology to digitally record the dance moves of performers. The recorded movements can then be reviewed and manipulated by a computer program. Although creating virtual-reality type technology for dance movements may be interesting to those involved, how does this serve to “protect the education of our children”? At an average salary of roughly $47,000, this money could have saved 16 North Carolina teacher jobs

6. American Dance Festival, Inc.: $50,000
A graphic designer and archivist will retain their jobs thanks to this grant. The American Dance Festival hosts dance classes, workshops and engages in other charitable activities to help support dancers. How will this help reverse a major international financial crisis, exactly?

7. Construction of a new Town Hall in Bladenboro: $200,000; $100,000
Total: $300,000
Why are taxpayers from across the country forced to finance construction of a local government office? This is a classic case of earmark pork spending.

8. North Carolina Folk Life Institute:$25,000
With the help of this grant, the Institute was able to retain its executive director.  Will this help “provide relief to North Carolina’s families”?

9. Preservation of an insect collection at North Carolina State: $253,123
We were promised that the stimulus was going to “save jobs.” We were never told it would also help preserve dead bugs.

10. Greensboro Symphony Orchestra: $50,000
These funds are used to retain the GSO’s director of marketing and education manager. More bailouts of what should be a privately-funded organization.

Some of these projects may be worthwhile if considered and funded on a local basis, but it seems that North Carolina found out it was possible to get some money, if they could come up with enough projects in a five minute period. They went ahead and spent money like drunken sailors on what ever projects they had laying around.

The Wake Forest University School of Medicine received $25 million in stimulus money for 74 different research projects. The school says the research is valid and puts people to work and brings money to the community, but others think it’s just a waste of money.

Lee Price has been unemployed for more than a year, and he’s not happy about the way some stimulus money has been spent.

“I’m just thinking it’s money that is supposed to be spent toward improving something — not for no monkeys.” Price said.

The monkey could not sit down long enough to be interviewed,  scientists did say however, that the poor creature had not slept more than five minutes since the experiment began.