Climate-Gate II: The Empire Strikes Back 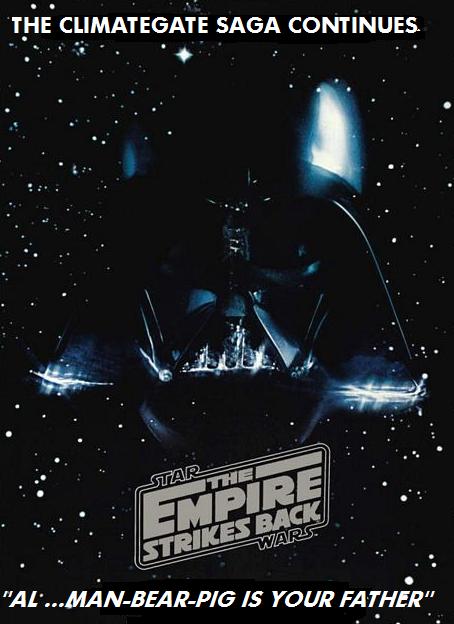 Climate scientists are not the least bit happy. They feel that none of the calamities that have befallen them over the past few months, are their faults. Climate-Gate, the IPCC mistakes, Michael Mann’s broken hockey stick, have been debunked, not because of the lousy science or the broken protocols etc, no these scientists attribute their problems to the over zealousness of the global warming skeptics who would rather see the world destroyed than redistribute income from the wealthy nations to the third world.

These scientists believe in the Al Gore hoax, so can you really listen their opinions about the recent debunking of their science?

I am afraid we may have to listen, because according to emails discovered by the Washington Times these climate-change scientists are planning on going after the skeptics in a major way.

Undaunted by a rash of scandals over the science underpinning climate change, top climate researchers are plotting to respond with what one scientist involved said needs to be “an outlandishly aggressively partisan approach” to gut the credibility of skeptics.

In private e-mails obtained by The Washington Times, climate scientists at the National Academy of Sciences say they are tired of “being treated like political pawns” and need to fight back in kind. Their strategy includes forming a nonprofit group to organize researchers and use their donations to challenge critics by running a back-page ad in the New York Times.

NY Times? What a waste of money if there ever a case of preaching to the choir, that is it!

“Most of our colleagues don’t seem to grasp that we’re not in a gentlepersons’ debate, we’re in a street fight against well-funded, merciless enemies who play by entirely different rules,” Paul R. Ehrlich, a Stanford University researcher, said in one of the e-mails.

Some scientists question the tactic and say they should focus instead on perfecting their science, but the researchers who are organizing the effort say the political battle is eroding confidence in their work.

They don’t come close to “getting it.” it is the bad science that is eroding confidence in their work.

“This was an outpouring of angry frustration on the part of normally very staid scientists who said, ‘God, can’t we have a civil dialogue here and discuss the truth without spinning everything,'” said Stephen H. Schneider, a Stanford professor and senior fellow at the Woods Institute for the Environment who was part of the e-mail discussion but wants the scientists to take a slightly different approach.

….Sen. James M. Inhofe, Oklahoma Republican and a chief skeptic of global-warming claims, is considering asking the Justice Department to investigate whether climate scientists who receive taxpayer-funded grants falsified data. He lists 17 people he said have been key players in the controversy.

That news has enraged scientists. Mr. Schneider said Mr. Inhofe is showing “McCarthyesque” behavior in the mold of the Cold War-era senator who was accused of stifling political debate through accusations of communism.

Gee I may be wrong on this, but I thought Senator Inhofe is stifling political debate through accusations that the scientific research was crap!

In a phone interview, Mr. Schneider, who is one of the key players Mr. Inhofe cites, said he disagrees with trying to engage in an ad battle. He said the scientists will never be able to compete with energy companies.

“They’re not going to win short-term battles playing the game against big-monied interests because they can’t beat them,” he said.

…or they are not going to win because they haven’t proved anything.

He said the “social contract” between scientists and policymakers is broken and must be reforged, and he urged colleagues to try to recruit members of Congress to take up their case. He also said the press and nongovernmental organizations must be prodded.

…..Not all climate scientists agree with forcing a political fight.”Sounds like this group wants to step up the warfare, continue to circle the wagons, continue to appeal to their own authority, etc.,” said Judith A. Curry, a climate scientist at the Georgia Institute of Technology. “Surprising, since these strategies haven’t worked well for them at all so far.”

She said scientists should downplay their catastrophic predictions, which she said are premature, and instead shore up and defend their research. She said scientists and institutions that have been pushing for policy changes “need to push the disconnect button for now,” because it will be difficult to take action until public confidence in the science is restored.

“Hinging all of these policies on global climate change with its substantial element of uncertainty is unnecessary and is bad politics, not to mention having created a toxic environment for climate research,” she said.

…..Paul G. Falkowski, a professor at Rutgers University who started the effort, said in the e-mails that he is seeking a $1,000 donation from as many as 50 scientists to pay for an ad to run in the New York Times. He said in one e-mail that commitments were already arriving.

The e-mail discussion began late last week and continued into this week.

Mr. Falkowski didn’t respond to an e-mail seeking comment, and an effort to reach Mr. Ehrlich was unsuccessful.

But one of those scientists forwarded The Times’ request to the National Academy of Sciences, whose e-mail system the scientists used as their forum to plan their effort.

An NAS spokesman sought to make clear that the organization itself is not involved in the effort.

The e-mails emerged months after another set of e-mails from a leading British climate research group seemed to show scientists shading data to try to bolster their claims, and are likely to feed the impression among skeptics that researchers are pursuing political goals as much as they are disseminating science.

George Woodwell, founder of the Woods Hole Research Center, said in one e-mail that researchers have been ceding too much ground. He blasted Pennsylvania State University for pursuing an academic investigation against professor Michael E. Mann, who wrote many of the e-mails leaked from the British climate research facility.

An initial investigation cleared Mr. Mann of falsifying data but referred one charge, that he “deviated from accepted practices within the academic community,” to a committee for a more complete review.

In his e-mail, Mr. Woodwell acknowledged that he is advocating taking “an outlandishly aggressively partisan approach” but said scientists have had their “classical reasonableness” turned against them.

“We are dealing with an opposition that is not going to yield to facts or appeals from people who hold themselves in high regard and think their assertions and data are obvious truths,” he wrote.

That’s the argument in an nutshell, these elitist scientists who are attacking that the “skeptics”  are the ones who won’t yield to facts. These scientists have no way to know if the skeptics will yield to the facts— after all, they have never presented real facts.

You Can Find More of Jeff Dunetz’s Writing Here at Red State And at his Personal Blog, The Lid