So, who are the rebels? This is the same as asking if we win, then who wins in Libya?

This is a really big unknown. Surfing through all of the news reports on the Libyan Civil War, the story that we would expect to see is the very one we do not. The one definite thing we know is that when the British sent in Special Forces to help the rebels, the rebels killed them. 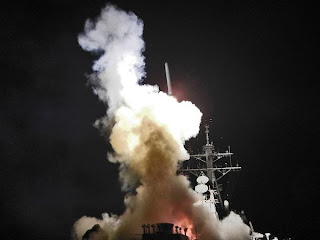 Meanwhile, the question is what can the USA and NATO do in Libya? We’ve got one aircraft carrier Enterprise can provide air attacks. Amphibious ships, Kearsarge Ponce, and Bataan can provide ground attacks on the coastal cities but then what?

Another important fact is Egypt’s support of implied Quaddafi (they oppose US intervention).

At the end of the day, it will be up to the rebels to win their own war. We can help but there’s got to be limits.

Which brings us to the fickleness of the Arabs generally. Here’s the story in today’s Washington Post. First, they had endorsed the “no-fly zone” military intervention in Libya; now that it has actually started, they want to reverse themselves. What are we to make of this?

1) Acording to the story, the Arab leadership had not properly negotiated the meaning and the scope of “the no-fly zone”. How could such an endorsement have been issued without the proper understandings having been reached?

The suspicion cannot be helped. They were just playing politics. Blame the West for the rebels loosing but now that their bluff has been called, the new line is to blame the West for intervening.

2) Why could the members of the Libyan League not have intervened themselves? Just how weak is the Arab World both politically and militarily?

The bottom line summary of this potential reversal is to underline the political and military weakness of the Arab nations.

Amazing: 'F Joe Biden' Just Made It to the ALCS
Nick Arama

Victory (Again) for GOP Against Dem Attempt at Federal Takeover of Elections
Townhall
Video: Liberal loons at Netflix walkout break man's 'We Like Dave' sign and then say he's got a weapon
Twitchy
Inject Into My Veins: Condi Rice Stuns 'View' Hosts With Knockout Argument Against Critical Race Theory
Redstate
They're at It Again: The Left Is Using Its California Playbook in Virginia
PJ Media