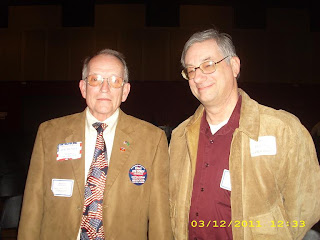 Attended my first county convention in 10 years yesterday. Governor Nathan Deal spoke. A bunch of resolutions were passed. There was a right-to-life resolution which combined abortion with a whole bunch of other issues. It narrowly passed. 300+ people attended.

Cobb County is located northwest of Atlanta, Georgia. It is generally considered to be the heart of the Republican strength in the state. Democratic voting strength has grown in the southern part of the county in recent years as population pressure from the core city moves outward into the suburbs.

That’s Joe and me in the picture.