Did you ever notice that in almost every great war in history, France has been involved in some way? Here’s an example: Julius Caesar’s Conquest of Gaul.

Background: Barbarians from north of the Alps had raided the Italian peninsula for centuries. By the middle of the 1st. century bc, Rome had expanded it’s holdings up to the mountain range. The area east of the range was falling under Roman control. In Rome, Julius Caesar had formed an alliance with Pompey and Crassus. Caesar’s part of the empire was north Italy (Cisalpine Gaul) and that part beyond the mountains that Rome controlled (Transalpine Gaul).

Meanwhile, barbarians in the German area were invading Gaul. A tribe allies with Rome asked Caesar for help.

Major Players:
. 1) France:Tribes of Gaul, facing invasions from other barbarian tribes from Germany and from the Romans

. 2) Other Countries:Rome, which by this time had become the major power in the lands bordering the Mediterranean Sea. Germanic and Swiss tribes from the German area, and the Celtic tribes in Britannia.

. 3) The Leaders:Julius Caesar, heavily in debt and needing conquests for money and glory to further his political position in Rome. Vercingtorix, who lead all the Gallic tribes in a rebellion against the Roman conquerors and gave Caesar his most desperate fight at Alesia. 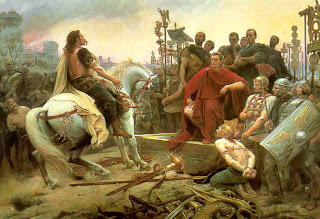 Narrative: Caesar crossed the Alps and defeated the Germanic barbarian invasion of Gaul or 58 bc. In 57 bc, he defeated the most important of the Gallic tribes in the Belgium area. The other important tribes submitted to Rome and Caesar announced that Gaul was conquered. An unprecedented 15 day celebration was voted in Rome.

Revolts of various tribes and actions against the Germanic tribes occupied the middle period of the war. He conquered southwestern Gaul in 56 bc. In 55 bc, he answered raids from Germany by building a bridge across the Rhine in a matter of days, marching his army across it and devastating the area beyond. In 54 bc he crossed the Channel and raided Britannia. The following year, he crossed the Rhine again. With both the Britains and the Germans cowed, he and Rome both felt that Gaul was good and conquered and free from external troublemaking.

Vercingtorix struck in 53 bc, bring the war to its final and its most desperate phase. All Gaul rebelled against Rome. Caesar was defeated at the town that is the modern Clermont, besieged Vercingtorix in Alesia but was surrounded himself. Only the superior engineering skills and superior discipline saved the Roman army. When Vercingtorix’s forces inside Caesar’s lines were starved out, the Gallic War was at last over but for the mopping up.

Pictured is Vercingetorix’s surrender to Caesar after the Siege of Alesia in 52 BC.

Aftermath: Caesar wrote memoirs of the wars. These books ranks among the best military literature of history. Afterwards, he led portions of his army back into Italy where he crossed the Rubicon River in 49 and began the Roman Civil War. Gaul remained a Roman Province until the fall of the empire.