240 Years and Counting... Notes on the Declaration &amp; the Constitution

Two hundred and forty years ago our founding fathers decided to risk their lives and livelihoods to begin a new nation by signing the Declaration of Independence. It was, in the eyes of the British, nothing less than treason… which indeed it was. Although the skirmishes that led to the break had been going on for a decade, when the final break came something extraordinary happened. A new nation was formed based solely on the rights of men. For the first time in human history a nation was founded not on geography or blood or dynasty or even religion. No, the United States was founded on the notion that: “We hold these truths to be self-evident, that all men are created equal, that they are endowed by their Creator with certain unalienable Rights, that among these are Life, Liberty and the pursuit of Happiness.” 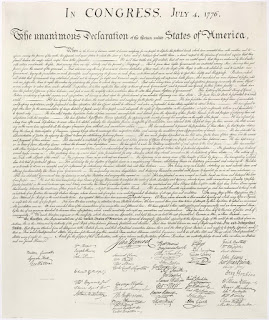 A nation however, regardless of its ideas, cannot function without a government that is made of something more than statements of what you believe and what you have fought against. In our case, for 13 years the United States largely operated under the Articles of Confederation, which gave the colonies a framework with which to work together to fight the British. Although they allowed the Americans to cooperate sufficiently to defeat the British, once the common enemy was vanquished the document proved to be fatally flawed as it provided for essentially a powerless central government.

It was the failures of the Articles which led to the writing of the Constitution in 1787 and George Washington’s inauguration in 1789.

The difference between the Declaration and the Constitution is extraordinarily important. The former is a declaration of what the colonists did not want, what they were fighting against, and why they believed they had every right to break with the British. It says nothing about governance, citizenship, or how to deal with foreign nations or fellow states. That’s what the Constitution does.

Probably to the surprise of many, the Constitution – including the Bill of Rights – does not grant anyone rights. As explicitly stated in the Declaration, rights are endowed by the creator. The Constitution simply explicitly states which rights the government is prohibited from infringing upon. For example, it doesn’t say “Citizens have Freedom of Speech” or “Citizens have the Right of Their Religion”. No, it says: “Congress shall make no law respecting an establishment of religion, or prohibiting the free exercise thereof; or abridging the freedom of speech, or of the press;” The assumption is, going back to the Declaration, that citizens have those unalienable rights, the Constitution simply states that Congress can’t take them away.

Just as the Declaration was groundbreaking, the Constitution was similarly so, only to a greater degree. Not only was the basic premise of the US Constitution that the power of government comes directly from the citizens, but it guaranteed – or at least that was the plan – the rights of citizens by explicitly prohibiting the government from abridging them. (Plus, it was all down on paper to be read by everyone!)

The Bill of Rights was not intended to be exhaustive in terms of the rights citizens had. On the contrary. These were simply the most important rights in the pantheon of rights citizens have and those that governments most often seem to tread upon. They wrote the 10th Amendment to make that point crystal clear: “The powers not delegated to the United States by the Constitution, nor prohibited by it to the states, are reserved to the states respectively, or to the people.”

James Madison, the Father of the Constitution, initially didn’t even want a Bill of Rights because he believed it was redundant. He thought it was obvious that government could do nothing other than what it was explicitly empowered to do in the Constitution’s Articles and therefore there was no need for such a Bill. Sadly, as has been demonstrated by an endless parade of politicians in the 20th and 21st centuries, the limits on government Madison believed was so obvious are indeed not so obvious.

The Constitution was not a perfect document – although the slavery issue was not a fatal cancer as it’s made out to be today – but it had in it the mechanism for its own improvement – or diminishment as the 16th and 17th Amendments prove. As such, as the nation grew and evolved it was able to adapt with the times, with everything from the 13th and 14th Amendments giving freedom and rights to slaves to the 22nd Amendment which sought to eliminate the chance of a defacto king. The problem today however is that virtually everyone in Washington, and a significant majority of Americans across the country have forgotten the basic premise of the Constitution, which was to empower the government to do an explicitly limited number of things and leave the people and the states to figure out the rest. Those limited things do not include mandating the purchase of health insurance, guaranteed free Internet access or subsidized housing…

But that is exactly what we have today. Politicians promise the moon and scratch enough backs to get Congress to pay for it. From protecting invented “rights” to abridging actual rights to providing free stuff to seeking to regulate entire industries, in 2016 there is nothing bureaucrats and politicians won’t try and do, regardless of the Constitution. With the Declaration of Independence our Founding Fathers chose to separate themselves from a government that was far less tyrannical than the government Americans face today.  Maybe it’s time for another Constitutional Convention… And if that doesn’t work, perhaps we should marry our Founder’s actions with today’s mores of pretty much anything goes and consider another “right” that is not explicitly discussed in the Constitution: Secession. Somehow I think John Hancock would be happy to sign on.