A Donald Trump presidency will be the death of the Republican party. Good riddance!

It looks like Donald Trump may run the table towards Cleveland, or close to it. Although it may end up being a two man race after the SEC Primary – John Kasich doesn’t count and Ben Carson is irrelevant – it may end up being too late to matter.  So why would Donald Trump be the end of the Republican party? Because other than building a fence – which is important – it’s likely that not much will change…and things might even get a bit worse.

Trump is attracting the attention of millions of Americans from across the spectrum. Somehow he attracted the votes of tens of thousands of evangelicals in South Carolina while at the same time drawing attention from minorities and millennials and self professed “conservatives”. His numbers are actually increasing, having won 45% of the vote in Nevada, almost a 50% jump from South Carolina less than a week before.  As I said last week, Trump 2016 is like Obama 2008 in that he is, for his fans, an empty vessel into which they can pour their dreams. That’s great for him on the campaign trail, but it might not be such a good thing for the country when he’s in the White House.

And that’s the rub, and that’s why the Republican party will be doomed by a successful Trump run for the White House. The Republican Party is on the ropes in the first place because its candidates run on conservative ideas and then run away from them once in office. Whether it’s vows to stop Obamacare or promises to cut spending, GOP voters vote for one thing and via the magic of Washington, they get something else. Most GOP voters are simply sick of it. That explains the Trump phenomena and the strength of Ted Cruz. 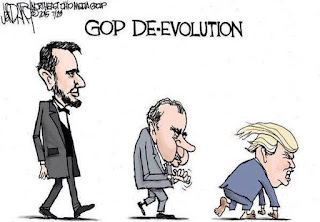 So how exactly does a Donald Trump presidency doom the GOP? Simple. Because a significant faction of the GOP voter base is ready to walk already – myself included – because the party has lost its way and become liberalism light, but because Ted Cruz is in the race many of us are at least hopeful that it’s possible to end up with an actual limited government conservative nominee and president. Another significant portion of the voters are looking for something different than the status quo… hence Trump. Together those groups make up half if not more of the party, and a Trump in the White House will not only not be conservative, he’ll likely not change much at all.

Change doesn’t come easy, particularly when you’re fighting a leviathan. And Washington is nothing if not a leviathan. It’s entrenched in almost every aspect of American life. It’s dysfunctional and provides money and services to millions of America’s who have become fat and happy suckling on the nanny state teat. And don’t forget the millions of well paid bureaucrats and supplicants doing the same.

Bobby Kennedy learned as Attorney General, that changing anything in Washington is almost impossible, and the leviathan of government is exponentially larger today than it was then. Even Ronald Reagan, who famously wanted to kill the Departments of Energy and Education, was stonewalled. And Washington is more entrenched now than it was then.

In order to change Washington one has to have a visceral hate for big government, because it won’t go away without a fight. There are too many people, on both ends of the government industrial complex who have vested interests in maintaining it as it is. Add to that the fact that Trump is a big government crony capitalist and you can see where this is going, or not, as the case might be. Sure, he’ll build a wall and rename Obamacare, but will he rein in the NLRB or the EPA or HUD?  Don’t count on it. Will he eliminate the Dept of Education or the CFPB or agriculture subsidies? Not likely. And perhaps most importantly, will he put a constitutionalist on the Supreme Court to replace Scalia? No chance.

And that’s why a Donald Trump presidency will be the death of the GOP. Nothing will change.  Washington will likely function very much the way it does now… only the people running it will have Rs by their names rather than Ds. Once Republican voters have their guy in the White House and nothing changes, the factions of the party that seek something other than go-along-to-get-along big government, crony capitalism, and the nanny state will have no choice but to form a third party.  Maybe it will be a conglomeration of Tea Party groups. Maybe it will be a amalgamation with the Libertarian Party. Maybe they go for the fence and create an entirely new party focused on limited government, free enterprise and individual freedom. Whatever it turns out to be, it’s happening because the Republican party no longer stands for anything but itself. In Donald Trump it has its man. Good riddance to it.