Marco Rubio’s campaign seems to have crashed on the rocks because of his… shall we say somewhat repetitive use of the phrase “Obama knows what he’s doing”, but the truth is, he was 100% right. The reason that so many people scoff at the notion that Obama knows what he’s doing is because the very notion of an American leader who seeks to destroy that which he leads is anathema to most rational Americans. And the truth is, Barack Obama doesn’t seek to destroy the nation he leads, he seeks to “fundamentally transform” it. Splitting hairs you might say, but there is a big difference between the two.

For Barack Obama the American glass is half empty. Sure, there’s water in the glass, but only what’s left after two centuries of whites stealing from blacks, Indians, Hispanics, after men taking from women and the rich taking from the poor. As such, it’s his goal in life to fill that glass up by redistributing that which has been stolen back to its rightful owners. At his very core Barack Obama is a divider – by race, by income by nationality among others – he is an anti-capitalist, anti western populist with fascist tendencies and no love for Christianity. 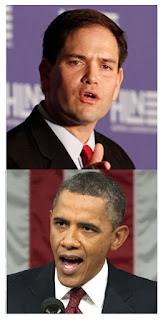 It’s only with that understanding that Rubio’s assertion makes sense. The nation that Barack Obama leads is not the same one most Americans live in. They inhabit the same geography, but they are not the same nation. It’s like the movie The Martian. Anyone watching it will recognize that it’s a serious movie that has a bit of levity scattered throughout. But somehow it was nominated for “Best Motion Picture: Musical or Comedy” at the Golden Globes. Most people would recognize that regardless of the category the Globes’ voters put it in, The Martian is no comedy. Similarly, the United States most conservatives inhabit is an imperfect one, but one full of opportunity, fueled by freedom and largely a force for good. For Barack Obama those same 57 states represent a nation defined by racism, inequality and oppression.

That is the nation that Barack Obama thinks he is leading and the one which he is seeking to fundamentally transform. And it’s easy to see that Rubio is right… he knows exactly what he’s doing. From Obamacare to the kneecapping of Chrysler shareholders to the using the IRS to muzzle Tea Party groups, it makes sense in the nation Barack Obama leads. This has been going on for seven years and most of the examples never find their way into the news. Here are three that recently did.

At the end of the day, Barack Obama does indeed know exactly what he is doing. He is laser focused on one objective: Diminish America. Reduce her influence on the world stage and suffocate freedom and free markets at home. If you’ve been paying attention for the last seven you’ve seen him doing that and much more, and doing it very effectively. It’s simply not possible to rack up that level of success – as Obama defines it – without knowing exactly what you’re doing and being very good at it. Sadly for Marco Rubio, being right was a Pyrrhic victory.