Gratitude at Christmastime... For our Freedom of Speech

Christmas is, among other things, a time for gratitude. Gratitude of course comes in many shapes and sizes. Some people feel gratitude for family, others for health, others for prosperity and some for all of those things and more and no doubt some for much less.

Whatever one’s situation here in the United States, we, as a people, have much to be thankful for. Perhaps there is nothing more deserving of our gratitude than the Constitution, that imperfect document upon which our nation was founded. It has much in it that has allowed our nation to not only survive, but thrive. Separation of powers. Limited government. The Amendment process. And of course the Bill of Rights.

Of all of the rights protected by the Constitution, arguably the most important is found in the 1st Amendment: Freedom of Speech. Why? Because human interaction of all kinds is based on communication. Whether it’s talking to a girl in a bar, arguing politics with someone at work, discussing the gospels after church or advocating for less regulation in front of the city council, speech is typically the mechanism through which we share ideas, have our theories challenged, test our persuasive skills.

Free speech is of course a messy proposition. If you allow free speech to flourish, eventually you’re going to come across some speech with which you disagree. Which is of course why the 1st Amendment exists in the first place. We don’t need a 1st Amendment to protect singing Jingle Bells or Sandra Bullock movies or Archie comic books. No, speech that everyone likes – or speech that people don’t care about one way or another – rarely needs to be protected. It’s all that other stuff that needs protection. It’s the Playboy magazine in the 1950’s, it’s the Seven Dirty Words, it’s the right to say your congressman, or president or local sheriff is a jerk. Basically the 1st Amendment protects one’s right to say things that other people disagree with. 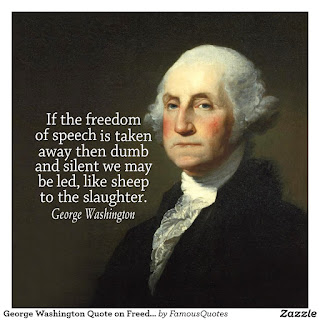 And there’s the rub in our holiday ointment. Although the Freedom of Speech is possibly the most important freedom protected by the Constitution, it is coming under fire across the country. From university speech codes and “safe areas” to wishing someone “Merry Christmas”, it seems that the fictional “right” to not be offended is superseding the actual right of free speech. That is a serious problem, and it brings to mind the answer Ben Franklin gave after the close of the Constitutional Convention when a woman outside Independence Hall asked him what kind of government we had: “A Republic, if you can keep it”. When the Freedom of Speech begins to be undermined, the Republic itself won’t be far behind.Earlier this year a US Senator from Rhode Island suggested using RICO laws to prosecute those skeptical of the “climate change” hoax. Not long after a group of prominent “climate change” professors seconded that suggestion. Although President Obama voiced his support of the notion of Free Speech in the face of recent crybaby university protests, two years ago his administration encouraged universities to ban “any expression related to sexual topics that offends any person”, which might at some point put someone whistling at a girl or commenting about her beauty at risk of official censure. Also on the university hit lists are the countless incidences of conservative speakers being shouted down and turned away from campuses. And then there are the terrorists who attacked the Texas Draw Mohamed contests and Muslims who advocate for Sharia law.

Whether from the government or from aggrieved minorities or even environmental activists, the movement towards silencing critics or opponents is a troubling one because it cuts at the foundation of our liberty and our Republic. The danger of creating an echo chamber is that eventually there are no dissenting voices to highlight possible errors in judgment, miscalculations, biases or simply reality conflicting with theory. And invariably those things end up in legislation, which further diminishes other freedoms as well.

As painful as conflicting ideas might be, as unsavory as offensive speech might be, having them on the periphery of good taste or “settled science” strengthens the core of our Republic. Rarely are ideas or values stronger than when they must be defended. It is in building that defense that we find our ideas or values to be worthy… or lacking, which, at the end of the day is how ideas advance, how values are forged and how our nation prospers. That is something we cannot forget and something we cannot allow governments or groups to undermine.

So this Christmas, with a toast of egg nog, perhaps a nod of gratitude to the Founding Fathers for giving Americans a gift that so few people on the planet enjoy… the right to open our mouths and be found a fool or a genius or a rabble rouser or just another voice in the cacophony that makes up the tapestry of our Republic.

The Supreme Court Commission Has Finished Its Report. Here's What It Concluded About Court Packing.
Townhall
Meet Craig Tamanaha, the 49-year-old arrested for allegedly setting fire to the Fox News Christmas tree
Twitchy
The Democrats Have a Hate Problem
Redstate
The Morning Briefing: The Sweaty, Gross Democrat/Media Lovefest Gets Even Nastier
PJ Media