A week and a half ago fascist thugs of ISIS attacked Paris. Three days later President Obama addressed the world from Istanbul and said the attack was “an attack on all of humanity and the universal values we share.”

That is a wonderful sentiment, but like most things that come out of Barack Obama’s mouth, it’s wrong. There are not universal values.

Take freedom of speech. Across the planet, from China to Saudi Arabia to Russia to Venezuela, (and most places in between) nothing resembling freedom of speech such freedom exists. In the West, from Australia to England to Italy to Canada, freedom of speech ostensibly exists, but the restrictions continue to grow. Even here in the United States where freedom of speech is enshrined in our Constitution, it is under siege everywhere. On universities, the very places where ideas are supposed to be studied and debated, speech codes are suffocating liberty and mini fascists seek to limit your ability to say anything they disagree with. In everyday life criticizing anyone for anything opens one up for accusations of being racist or sexist or homophobic or some other form of intolerance.

Freedom of religion? One wonders how Coptic Christians in Egypt feel about freedom of Religion. Try wearing a crucifix in Saudi Arabia. How free do the followers of Falun Gong feel in China? Jews in Europe… Here in the United States Christians are under assault for refusing to participate in gay weddings while atheists seek to eliminate even the shadows of Christianity from the public square.

Freedom in general is not something found on most parts of the planet… Across the Muslim world women are slaves and getting raped is a crime for which one can be ostracized, jailed  or even killed. South America and Africa are rife with failed states where graft is the natural order of things and the populations are mired in poverty (real poverty… not what passes for poverty in the United States) while government officials and their connected cronies live in luxury. In China the government or government aligned corporations control virtually everything, even down to reproduction. 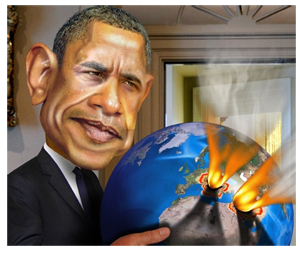 All in all, the values that Obama is suggesting are universal are nothing of the sort. Widespread notions of freedom of speech, freedom of religion and individual liberty simply don’t exist. The vast majority of people living on the planet today do not share or experience any of those values. There has never been a time in human history where a majority of people shared such values. Indeed it’s never even been close.

It is only with the rise of the West, where such freedoms and values were developed and flourished and codified, that the notion of “universal freedoms” could even be imagined. Such freedoms hit their apex with the writing of the United States Constitution. For the first time in human history there was a document that not only explicitly spelled out the rights of citizens that could not be impeded, but more importantly, explicitly limited the power of government to only those things it was specifically empowered to do by the citizens.

The reality is, the “universal freedoms” Barack Obama talks about simply don’t exist. They never have. But somehow he, along with the rest of the left pretend that they do, which is exactly why they seek to shift power away from the constitutionally constrained government of the United States to the unconstrained United Nations. They live in a fantasy world where if everyone would just put down their weapons and embrace one another that the world will suddenly be all right. They feel like if everyone simply kept the “fair share” of their income then magically the world become a nirvana in which every family enjoys a lifetime of Norman Rockwell dinners.

And that tells you exactly why ISIS is a problem and the West is in decline. Europeans, along with the left in America, willfully ignored what made the West a success in the first place… culture inspired by Christianity – although at times hindered by it as well, built on intellectual curiosity and empowered by individual liberty and freedom. The notions of freedom of religion and speech and private property as we know them today evolved in the West over a period of 800 years. They were not codified by an edict by a Pope or Martin Luther or Napoleon or Queen Victoria or even James Madison. These decidedly non-universal values came about as the result of a struggle between church and state and citizenry as well as between churches, states and citizens. Much bloodshed was spilled in the process of developing those values. They were hard fought for and won, and to the degree that they exist in other places around the world, for the most part they were brought there by westerners.

It is not so much that the West is collapsing because it’s being invaded (which it surely is) but rather rotting from within because it has spend the last half century protected in a cocoon of security provided by the American military. After rescuing much of the world from the Nazis and the Japanese in WWII, for more than half a century the United States has provided a bulwark against the Soviets and the Chinese and later the Russians. Under the protection of American power, the West – including the United States – deluded itself with the notion that peace was now the norm and that civilization had finally come to humanity. As such, it was possible to create vast social programs to nurture citizens from cradle to grave with little concern about fiscal or social responsibility. In addition, they opened their doors to allow millions of immigrants to enter their countries and enjoy those programs without ever being required to assimilate. Indeed, in many European countries assimilation could be almost impossible even if it were desired, which it rarely was.

Today we have the logical conclusion of the argument that no culture is superior to any other. Because Western culture is no better than any other, there is no basis to demand assimilation. Migrants by the millions move to the West and then seek to establish mini-me versions of the failed states and dysfunctional cultures they left behind… Indeed, across Europe there are movements under foot to implement Sharia law above national law while France, Britain and other nations are peppered with “No-Go” zones.

Given that it’s seen as racist or xenophobic to suggest that one’s culture is superior to another, it’s verboten to ask who put men on the moon, mapped the human genome or invented mobile phones. Such questions do not matter because all cultures are equal. And so it goes. As the self loathing West derides the very things that made it successful in the first place it finds itself under siege by those who are not only proud of their culture and values but are willing to both kill and die for them.

To see how this juxtaposition of passion and cultural apathy might play itself out, read or watch something about the Battle of Thermopylae. Observe how a small force of highly motivated and passionate fighters can have an impact exponentially larger than their numbers might suggest. King Leonidas and his men lose their lives and the battle… but the Greeks win the war. Unfortunately for America and the West, our impotent and incompetent leader is Barack Obama, who refuses to even see that we’re in the midst of a culture war, nevermind recognize that for the other side it’s literally a fight to the death. Let’s hope the next occupant of the Oval Office understands that America and the values she holds are not only, not universal, but they are exceptional, and indeed worthy of both praise and protection.

Due Process Applies to All, Even Police Officers
The Heartland Institute

Is Lisa Murkowski Going to Run Again? She Better Not After Her Latest Vote
Townhall
LeBron James' 'you're next' tweet about officer who shot Ma’Khia Bryant got deleted (but here it is)
Twitchy
Joe Biden Releases an Absolutely Disgusting Statement on the Columbus Police Shooting
Redstate
Insanity Wrap #191: Did Jury Intimidation Play a Part in the Chauvin Verdict?
PJ Media