The People's House... A Historic Opportunity To Lead Should Not Be Squandered On A Squish

We’ve been told the House is dysfunctional. Nothing could be farther from the truth. This is exactly how the House is supposed to operate. When someone doesn’t have the confidence of his party and they are in the majority, he should be shown the door. But we’re told that a group of right wing Tea Party types are somehow keeping the people’s representatives from governing. If only that were only true! If it were, Obamacare wouldn’t be funded. It is. Barack Obama’s amnesty wouldn’t be funded. It is. The debt ceiling wouldn’t have been raised like a helium balloon. It was. Unfortunately, the conservatives in the House have had little success stopping the big government policies of Barack Obama, the Democrats and the GOP establishment. 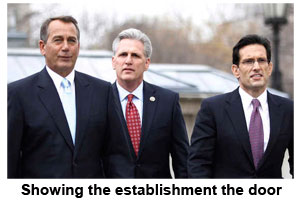 So, now, today, after the three highest members of the House GOP establishment are either out the door or on their way out, members are being encouraged to put a guy who is 100% establishment, [mc_name name=’Rep. Paul Ryan (R-WI)’ chamber=’house’ mcid=’R000570′ ], in charge.

Not only should they ignore pleas to put Ryan in charge of the House, they should select a real conservative from the Freedom Caucus like [mc_name name=’Rep. Jim Jordan (R-OH)’ chamber=’house’ mcid=’J000289′ ] or [mc_name name=’Rep. Mark Meadows (R-NC)’ chamber=’house’ mcid=’M001187′ ]. In addition, they should immediately call for a Motion to Vacate the Chair and stop Boehner from doing… pretty much anything.

Of course we hear the gnashing of the teeth from the usual quarters of the establishment telling us that this is a disaster for the GOP… that a fight over Planned Parenthood, a fight over the debt ceiling, a fight over the Continuing Resolution will be suicidal for the GOP if they end up in a stalemate that ends up “shutting down the government.” Frankly, nothing could be farther from the truth.

Two years ago we heard the same thing when [mc_name name=’Sen. Ted Cruz (R-TX)’ chamber=’senate’ mcid=’C001098′ ] shut down the Senate as he fought to defund Obamacare. We were told that the GOP would be blamed for the government shutdown – which, sadly, is nothing even close to a shutdown as 83% of the government still operated normally – and would likely lose all chances to take the Senate and would probably lose the House to boot. Then when the election finally came a funny thing happened… the GOP picked up seats in both houses and picked up the Senate in an historic win.

In 2010 the GOP picked up the House telling the country it would stop Obamacare. Led by the establishment, it didn’t. In 2014 the GOP picked up the Senate telling the American people it would stop Obama’s illegal amnesty. Once again the squishes in the middle buckled. The only reason the House is in turmoil today is because enough Americans voted to stop Barack Obama that something called the Freedom Caucus exists to throw it into that turmoil.

As I quoted Jim Dint saying in 2010 when I wrote in support of Christine O’Donnell for the Senate from Delaware over the despicable squish Mike Castle, “I’d rather lose fighting for the right cause than win fighting for the wrong cause.” What’s the point of winning if the guys you elect do exactly the same things the guys you voted against would have done? The voters have had enough of GOP squishes… as was demonstrated by Mitt Romney’s dismal performance at the polls in 2012. They want leadership that is willing to stand up and say they will fight Barack Obama’s leftist agenda, and then actually do so. Fight on the killing of babies in the womb? Bring it on. Fight to stop empowering government largesse via another debt ceiling increase? Absolutely. Fight to stop the drive to turn the country into a third world banana republic via open borders? When do we start?

In 2010 and 2014 Americans showed the GOP they were willing to support a fight to when they sent Representatives and Senators to Washington who had indeed promised to fight the progressive cancer that has taken over Washington. Once again, once in power however, the party demurred from the fight.  The GOP establishment types were more interested in the perks of office, their privileges in Washington, making sure big donors were happy than actually accomplishing what voters had sent them to Washington to do.  That’s the reason the GOP brand is so damaged, not “dysfunction”.

We are in a unique moment in American history and for once the GOP has the opportunity to show real leadership when it really counts… i.e. in the run-up to the most important election in a generation. Not only should they not make [mc_name name=’Rep. Paul Ryan (R-WI)’ chamber=’house’ mcid=’R000570′ ] or any other amnesty loving establishment squish Speaker, they should find the most vocal, passionate conservative voice they can and proudly follow him as he leads a national debate on whether the future of America is one of prosperity driven by free markets and limited government or malaise and decline driven by government spending and regulation.  In the unlikely event they lose, so be it.  If a prosperous America is to be replaced by a third world banana republic, let freedom’s death come after a full-throated defense of liberty rather than following a faux battle where party leaders put on a show for the little people but share cigars and whiskey in the halls of Congress as they divvy up the spoils of power.

Now is exactly the time for such a full-throated fight, and appropriately enough history has put the People’s House on center stage. The question is, does the GOP have the courage to actually lead in a fight when it counts or would they rather play a paper tiger as Barack Obama sets fire to the United States Constitution?