Happiness doesn't come from equality of outcomes... Nor does prosperity

For years we’ve been hearing stories of schools scrapping dodge-ball, sports leagues eliminating scoring and schools passing students despite their lack of academic achievement. The reason, we’re told, is to protect the self esteem of students who might otherwise be harmed by coming up on the short end of a competitive stick.

Of course none of this is a surprise to anyone who has watched as liberals have transformed the United States economy from a dynamic prosperity creating machine to a middling debt addict where the middle class finds itself on its knees as the government takes care of those at the top and the bottom of the economic spectrum. 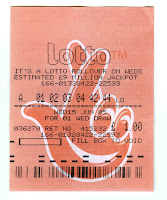 Tangentially… I occasionally play the lottery. If the jackpot posted on the sign on the road from downtown flashes over $200 million I’ll consider plunking down a dollar or two for a ticket. Of course I’ve never won but I find it entertaining to wonder for a brief moment what I might do with my windfall.

Here’s how these two tangential things are related. Happiness can’t be given to someone. Nor can self esteem. Yes, someone can give you money, and it can ameliorate some problems, but that doesn’t buy happiness. In a similar way, a parent or a school can tell a child they are wonderful, that grades or scores don’t matter… but the kids know better.

Happiness doesn’t come from having, it comes from earning. That’s the fundamental problem liberals don’t understand, whether it’s telling kids there are no winners or losers in sports, or the government giving people money and food stamps and phones and housing vouchers. Liberals focus on outcomes rather than opportunities. They seek a de jure egalitarian society rather than one governed by effort and innovation. It’s not enough for everyone to have the same chance at success based on some test or competition. No, the resulting output, whether it’s bank loans, jobs or college acceptance letters, has to reflect the hue and composition of the larger population or the test is by definition racist or sexist or some other ist. (While such a framework is supposed to apply in boardrooms and law enforcement, for some reason it never seems to apply in the NBA or the NFL…)

Liberals think that if they somehow make everyone equal, everyone will be happy. Once again they’re wrong. The Soviet Union and modern North Korea might be the best examples of “egalitarian” societies in modern history. And in both cases the people were indeed equal… but that equality was / is an equality of poverty, of desperation, of despair.

Just as there’s a difference between “equality” of outcomes and equality of opportunity, there’s a fundamental difference between earning something and being given it. Compare the way tenants of housing projects take care of their homes with the care shown by those who pay mortgages, or compare the level of pride expressed by a kid at winning a bronze medal to that of a kid being issued a participation medal. It’s natural to value something more when it’s earned, rather than when it’s given. Hard work doesn’t guarantee happiness, but it can instill pride, a sense of accomplishment and a sense of having done something of value, all things which are important elements of happiness.

It’s no coincidence then that as the government has become more generous in its gifts to citizens and its regulatory framework – intended to “protect” citizens from the verities of the marketplace – has become a leviathan akin to a straitjacket, the economic dynamo that was once the United States has become has become a lumbering husk of an economy that is kept alive via stratospheric levels of debt? The result is a workforce participation rate at levels not seen since the 1970’s, skyrocketing welfare rolls all while the percentage of people actually paying income taxes has fallen off a cliff.

At the end of the day, liberals claim they seek widespread prosperity and happiness. In reality however, whether it’s a participation trophy or a nanny state that “protects” the citizenry from virtually anything, they accomplish neither. From kids ill equipped to handle failure in life to millions of Americans who have simply stopped bothering to look for work, to the tens of millions who are on government assistance, liberals talk a game of prosperity but never actually realize it. Sadly, they’re not the only ones paying the price for their failures. The entire country is.

But at least we can take solace in the fact that their self esteem won’t be hurt because success isn’t measured by actual results, but only by intentions…

Actually, There Was a 'Red Wave' in the 2022 Midterm Election
The Heartland Institute