South Carolina, Murder and a Flag: Maybe the race problem in America is… the focus on race

The events last week in a South Carolina were tragic and heartbreaking. Those are the only words I can come up with that embody the senseless loss of life and the pain the family and community feels.

Unfortunately however that tragedy has spurred some misdirected anger… specifically as it relates to what everyone is (wrongly) calling the Confederate flag. Many people are suggesting that that flag is a symbol of hate and are somehow using its presence on the grounds of the South Carolina capital as a symbol of state or white approval of the things that motivated a 21 year old white man to murder nine innocent people as they sat in church.

The flag may or may not be a racist symbol; it depends on who you talk to. Whether it is or is not however has little bearing on this situation. If people want to take it off the state’s grounds they have every right to petition to do so. What might have been acceptable 50 years ago maybe isn’t today. Mores change over time. But the problem definitely isn’t that that flag somehow inspired that killer. That argument is specious. There are tens of millions of those flags in America and if somehow the flag was a symbol of such viscous, violent hate we wouldn’t be talking about nine black victims of one drug addled white man, we’d be talking about exponentially more… and doing so regularly. But we’re not. In reality, the opposite is true. It’s an aberration. White people in America aren’t regularly going around killing black people. According to the FBI, in 2013, of the 2,491 black murder victims, only 8% were killed by whites, and in this case Hispanics are counted as white. Compare that to the reverse where 49% of the 1,891 non-Hispanic white murder victims were killed by blacks. 8% vs. 49%! Whites are six times more likely to be killed by a black person than the reverse. 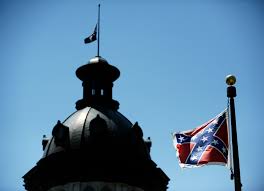 The entire meme of a nation beset by white racism is simply false, and focusing on the “Confederate” flag simply muddles the debate. If you want to get rid of the flag, go ahead, but don’t somehow blame the flag for this tragedy. The young man, like so many other mass murders, was on mind altering drugs. In addition, he wanted to start a race war… so did Charles Manson. Does that mean that we have to ban Beatles records? Taking that argument one step further, thousands of Americans have been killed over the last two decades by Muslim terrorists who explicitly point to the Koran as their motivation. Should then the Koran be stripped from the shelves of every bookstore in America and Islam banned from the public square? The flag in question may indeed stir up strong emotions; both in support and opposition, but taking it off a flagpole won’t solve the complex race situation in America.

The murder of nine innocents by a racist, drug addled crazy loner says nothing about American society as a whole. It says something about racist drug addled crazy loners. There always have been, and there will always be racists in our midst – and they come in all colors – but there’s a difference between a racist carrying out his evil plan and a nation that condones, tolerates or even supports such actions or thoughts. Across the country among both blacks and whites you see just the opposite.

Those who are looking to somehow solve the race problem in America by focusing on banning a flag from the public square are fooling themselves into thinking they are doing something of value. When there were no blacks in football we were told there was a race problem. Today 60% of NFL players are black. When there were no Fortune CEOs we were told there was a race problem. Today the CEO of American Express is black. When all the occupants of the White House were white we were told we had a race problem. Today, the president, his Attorney General and the Secretary of Homeland Security are all black and we’re still told we have a race problem. Maybe the race problem in America is… the focus on race. In the case of this tragedy in South Carolina race was certainly an issue, and maybe it’s driving issue, but thankfully it is an aberration, not the norm. Trying to leverage an isolated tragedy into a vehicle to propagate the fiction that white America is racist is foolish at best and probably reprehensible as it distracts from solving real problems that Americans of all stripes face.