I’ve never been a hunter. Somehow I can’t quite bring myself to be the one who shoot’s Bambi’s parents. I have a couple of friends who do however and I don’t really have a problem with it. One lives in New York and always seems to come home empty handed. Frankly I’m not sure he could bag a deer in a petting zoo. The other lives in Texas and he constantly tells me about the deer he’s shot. Not being a hunter I wondered what made New York so different than Texas when it came to deer hunting that someone in the former would be so much less successful than the latter. Well, it turns out to be technique. My friend in New York treks out into the woods, tries to camouflage himself and waits for hours in the snow and cold until he sees a deer. At that point he tries to shoot it… and usually misses.

My friend in Texas does things a bit differently. He apparently has a mechanized feeder of sorts. This feeder is timed to pour out a bit of deer food every day at the exact same time. Over time the deer figure out the schedule and simply show up to the buffet at the appointed time. Given this schedule, my friend, whenever he goes “hunting” simply goes to his property and shoots a deer or two. Once he has shot a deer the others scatter and will stay away for a while, but eventually they come back and my friend is back shooting fish in a barrel again. 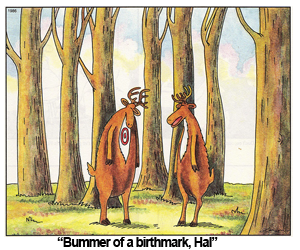 There may be a lot of things one can call what my friend in Texas does, but hunting is certainly not one of them. This story came back to me last week when I read a piece about a school system in Pennsylvania that is going to begin providing free meals to every student in its system. This is not some needs based program providing lunches to students who might not otherwise eat on any given day. No, this is every single student in the system. What’s worse, the school will then be providing the fingerprints of students to the federal government under the guise of “accounting”. This school is one of the first to figure out that if it offers lunch to every student it will maximize the funds it derives from the federal government.  The rest of the Education Industrial Complex schools will no doubt follow suit soon enough.

Along with the deer, this whole thing also made me think of a meme that made its way across the Internet a few years ago. It compared the National Park Service’s missive about not feeding animals lest they become dependent on humans to the federal government’s aggressive policies seeking to increase the number of people receiving welfare and food stamps. Indeed the Park Service puts it rather explicitly: “Animals that are fed by people become dependent on human food, and may lose their natural fear of humans and their ability to forage for natural foods.” They don’t state that the same thing to humans… but it does.

So now with this latest not only do we have the federal government seeking to grow the number of students dependent on the federal government for lunch, but we also have them collecting fingerprints on the students. Ostensibly the prints are being taken for accounting purposes, and are not identifiable, but how much of a stretch is it to imagine a government that tracks virtually every phone call Americans make and regularly requests user data from ISPs and other Internet companies to start a database of students that can track things like the number of meals skipped, the number of visits to the school nurse or the number of times a student has been sent to the principal’s office or suspended?

It’s bad enough that the Obamacare keeps a person’s most sensitive data forever, now imagine that that data is somehow melded with data from schools about students with family and or discipline problems. Would the government step in to threaten parents if their children skipped too many lunches? Would they mandate lunchtime Al-Anon meetings for children of alcoholics? Would they use the IRS to ensure parents are spending enough money on “approved” extracurricular programs for junior?

While I’m quite sure the government doesn’t have exactly the same plan in mind for students that my friend in Texas has for the deer, the principal is the same. Use the gateway drug of lunch to teach young people that government is the fount from which all things come – food, condoms, healthcare, housing subsidies and EBT – and soon the government has them eating out of its proverbial hand. Just as the National Park Service warns that human fed animals may lose the ability to forage for themselves, a person who’s dependent on government for virtually everything in their lives ceases to be an objective, critical thinking citizen of the republic. They instead become foot soldiers in the government’s army as it seeks to accumulate even more power. Monitor your parents for racial insensitivity… Protest the homes of CEOs who don’t pay “enough” taxes… Refuse to use products from Company X because they provided funding to political group Y… Community organizing as government policy.

At the end of the day, becoming dependent on government is a recipe for disaster. Not only does it foretell lifetime of subsistence, more importantly it costs the individual and the nation the potential of a life driven by entrepreneurship, ingenuity and hard work, the very things that made the cancer of government largesse possible in the first place.