Do Black Lives Matter? No, Apparently, Not Unless They're Good For The Race Pimp Business.

For the last two years the phrase “Black Lives Matter” has been a rallying cry for those who suggest black lives don’t in fact matter to whites or to the police. In seeking to make sure that no one misses the point, across the nation citizens just trying to go through their everyday lives have been subjected to restaurant sit ins, manufactured traffic jams and various other protests. As annoying as those activities are, the movement has become entwined with a more sinister trend, delegitimization of police.

From Barack Obama’s “The police acted stupidly” to Bill de Blasio’s suggestion that the NYPD’s “stop and frisk” program was racist to Baltimore prosecutor Marilyn Mosby’s invoking the thug mantra “No Justice, No Peace” as she indicted six police officers for the death of Freddy Gray, black Americans have been endlessly warned that the police are the enemy. They have been told that the police are racist and that the criminal justice system will provide them with no justice at all.

The consequences of this indictment of the police and the criminal justice system are exactly what you would expect. Police have been targeted, literally and lethally, across the country. From getting shot while sitting in their patrol cars, to getting attacked with axes as they stand on the street, to being swarmed as they try and make arrests, police today have targets on their backs like never before. Such is the obvious outcome from government officials and race pimps telling blacks that the police are the enemy. 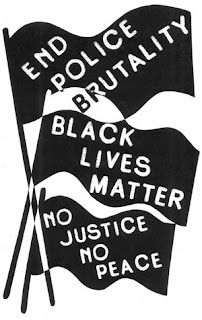 That, however, is not the only outcome that was predictable as the false narrative behind the Black Lives Matter movement took hold. There is another, even more sinister tragedy that gives lie to the words themselves: skyrocketing crime and the flowing of black blood in the streets in places like Ferguson, New York and Baltimore. And, most of that blood is shed neither at the hands of whites or the police, but usually at the hands of other blacks.

As police have their authority and legitimacy challenged, the citizens of the neighborhoods they police have become targets and victims. Murder rates have jumped in NYC under de Blasio as police feel neutered. In Baltimore, as police have become fearful of doing their jobs, black citizens are paying the price as shootings and murders skyrocket and anarchy reigns.

Conservatives don’t typically suggest that every cop is a Boy Scout. The killings of Walter Scott and Akai Gurley are certainly troubling and rightly raise flags. And there are still many questions that remain about the circumstances of Freddie Gray’s death. But, thankfully, those deaths are news because they are so rare. Of the tens of millions interactions police have with black Americans each year, only a tiny fraction of them result in wrongful bloodshed or inappropriate behavior. Indeed, most of those interactions are with blacks who have been victims of crime or who are citizens seeking help from police.

But when police become the enemy, they cease to be able to provide the basic service they are intended for… fighting crime and preserving the peace. As crime victims are disproportionately black, when police become less effective, blacks disproportionately pay the price. To put that in perspective, following the April riots in Baltimore, where Mayor Stephanie Rawlings-Blake told police to stand down so that rioters could have space to “destroy”, May saw an unprecedented jump in violent crime, with shootings up 72% from the previous year and murders reaching 43, the most in any month since August 1972. And most of those victims were black… and the hands of other blacks… but those lives don’t seem to matter to the liberals and the race pimps who are using the extraordinarily rare deaths of black men at the hands of police to decimate the entire criminal justice system.

While we’re told that “Black Lives Matter” what apparently is really the case is that only some black lives matter… those who give liberals and race pimps a platform upon which to enrich themselves or increase their power. The black lives of men, women and children who die at the hands of black criminals emboldened by the neutering of the police… not so much. And unfortunately, the latter outnumber the former exponentially.