I’ve often used the phrase “when I’m rich” followed by, “I’m going to do X and Y and Z”. Anyone hearing me say that could certainly be forgiven for thinking my primary motivation is to grow my bank account just for the sake of filling it up. In reality however nothing could be farther from the truth. While I do want to grow my bank account, it’s not the money. If it were I could probably figure out an easier way to do it than tilting at windmills seeking to start a successful business. Robbing a bank would be faster, as might stealing someone’s identity or running a Nigerian prince scam. But all of those things would defeat the purpose. 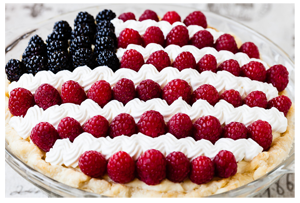 So what is the purpose? I want to be a part of the success that is the American experiment and feel like I’ve helped make the pie bigger. I constantly make the argument that the United States is the greatest nation in the history of man, by a long shot. The greatest period of improvement in the condition of man in all of human history just happens to coincide with the birth and ascendancy of the United States. And why is that? Simply put, it’s because of the limited government and rule of law dictated by our Constitution and our embrace of free markets. Those conditions have created a nation where free men can use their minds and bodies to create value where previously none existed. Whereas throughout most of human history scarcity was the norm, with men fighting over slices of the pies, American history has been a continuous march of creating ever more pies.

That doesn’t mean that our history is perfect or that injustices did not take place, they did, and they sometimes do. But the history of human civilization is largely one where injustices were the norm rather than the exception and where the law was determined by whoever held the largest sword or commanded the largest army rather than by a constitution based on limited government and fundamental rights of the citizens.

That fortuitous, not to be confused with accidental, combination created an environment where things that simply could never have happened anywhere else happened here, or at a minimum, could not have occurred on an American scale. It was never our DNA that made Americans different, rather it was our limited government and our passionate support of free markets.

The result is more widespread prosperity than has ever been achieved in all of human history, and not only in the US, but in much of the rest of the world that has interacted with us. And the key to that advancing prosperity was a nation of citizens foolhardy enough to think that they could succeed by creating from their efforts products or services others were willing to freely exchange their hard earned money for. While industry and the division of labor are not uniquely American concepts, the notion that anyone from any station could not only participate in the marketplace, but could in succeed in it regardless of their background, is.

Thankfully I do not find myself in a society where heredity decides who succeeds and who fails, nor one where my religion or race or gender dictate my outcomes. No, I’ve had the good fortune to be born in a society where any individual can succeed in growing the pie of prosperity… it’s just a matter of figuring out how to create value for others… how to do something, to make something that others feel like is sufficiently valuable that they willingly pay you for it.

And so it goes that while I do indeed seek to grow my bank account, that is simply a measure of my success, not of how shrewd I can be to trick others out of their fortune or how strong I can be to take from others, but rather, that I have joined the pantheon of entrepreneurs and innovators who have harnessed the promise of the American experiment and created something of value to others… and ideally eventually leave the world a slightly better place than it was when I got here. Of course if I can afford to fly on NetJets rather than coach once or twice along the way I’ll be happy…

Which brings me to the X in my X, Y, Z… Which is supporting conservative candidates and figuring out how to communicate the value of limited government and free markets to a segment of the population to whom the concepts are utterly foreign.

It pains my heart to see the march of progressivism that has taken place over my lifetime. If you look you can always find problems, everywhere. Like zeroing in on a one month decline in a stock that has consistently grown in fits and spurts for decades, even when things are going well it’s easy to find areas of friction and failure. Unlike most of our history however, when the United States almost single-handedly drove the prosperity of the 20th century, it is those places of friction and failure that are now driving our politics and the resulting policies.

For most of human history the solution to the challenge of scarcity was not men creating more pies, but rather taking slices away from others, usually by the sword. The American experiment changed that and created a new, better, more effective solution for battling scarcity and as a result the world is a far more prosperous place. It’s no coincidence that as progressivism has grown over the last half century, American economic advances have similarly slowed.

Hopefully 2016 will be the apex of cancer of progressivism and the country will begin to return to a time when success meant creating value in the marketplace rather than using government coercion to take from those who do. It’ll take more than a small government, free market conservative in the White House to accomplish, but that’s a hell of a good first step.