Barack Obama will go down in history as the most successful president since Abraham Lincoln...

The eight year reign of Barack Obama will go down as the most important in American history since Abraham Lincoln.  Lincoln led the United States at the single most important decision point in its history. At stake was no less than the question of whether the country would continue as a single nation or would it split in two as Manifest Destiny was fulfilled. Would there be a largely agrarian, slaveholding Confederate States of America bordering on a largely industrial and free United States of America or would a single, free and economically mixed United States emerge? At no point in the subsequent century and a half did the United States ever face a more foundational question.

Six years into Barack Obama’s presidency – and looking with much trepidation at the “last” two – one can’t help but wonder what kind of a nation will emerge on the other side. “History” said Winston Churchill, “is written by the victors” and like it or not, Barack Obama is the victor. Not sure about that? Take a look at the latest capitulation by his supposed opposition, Boehner and McConnell, the GOP leaders of the House and the Senate, respectively. In what is only the most recent example of obsequiousness they have vociferously attacked their own base in order to allow Obama to continue with his patently unconstitutional amnesty. 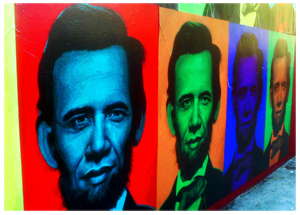 And what is it that Barack Obama has done to merit such distinction? He has opened the Pandora’s Box of unprecedented, omnipresent, government intervention. And like the evils escaping from Pandora’s Box, once government intervention is put in place you can’t get rid of it. With Obamacare he decreed that the government can tell Americans what they must buy, for their own good. With his NLRB appointees and the nationalization of General Motors he has eviscerated private property rights. With his using the IRS to muzzle opposition and his FCC taking over the Internet, he has taken a sledgehammer to concept of free speech and free markets.

In addition, his regulatory bonanza and welfare policies have cut the legs out from the basic premise of hard work being the key to success in America. By making entrepreneurship and job creation more difficult and by providing a seemingly endless array of benefits, he has driven the labor participation rate down to levels not seen in four decades.

And of course it’s not just the laws. He has set black against white as he constantly invokes racism in places where it simply doesn’t apply. What’s more, he has essentially told black Americans, those who are at most risk of being victims of crime, that the police are their enemies. He has set the poor and middle class against the rich as he assails the successful as robber barons who earned their success on the backs of others.

The country was far from perfect when Barack Obama took office and you can make the argument that it was already heading in a troubling direction when he came along. But the difference is, unlike Abraham Lincoln, who sought to save the Union, Barack Obama set out to fundamentally transform it. And that he has… from a place where individual initiative was the key to overcoming challenges, achieving success and finding happiness to a place where the first instinct of many is to look for someone to blame for their lack of success or happiness, or to try and figure out which arm of government to look to provide them.

Combine that entitlement / victim mentality with a legion of regulatory diktats and unconstitutional decrees – that no one in power seems willing to fight – and you have a recipe for a banana republic where power is held by whoever bribes the largest number of people and creates scapegoats to fuel populist furor. And so it goes as a nation of giants transforms into a nation of beggars and a government limited by the Constitution becomes a one limited only by a president’s appetite.

No president in 150 years has changed America more. Not Roosevelt, not Kennedy, not FDR not Reagan. Such is the transformation Barack Obama promised and delivered. Most Americans won’t view it as success, but the left does. Therefore, if history is indeed written by the victor – or in this case by his lefty sycophants in the media – Barack Obama will go down as the most successful president since Abraham Lincoln. And at this point it might be useful to think of something Churchill’s enemy, Adolph Hitler, said: “If you tell a big enough lie and tell it frequently enough, it will be believed.”