On Thursday the FCC moved to regulate the Internet via what’s commonly called Net Neutrality – although like Obamacare before it was passed, we don’t know everything that’s included in it! Net Neutrality is beyond a doubt the single most despicable thing Barack Obama has done as president. (The FCC is ostensibly an independent agency, but under Obama it’s been anything but.) The big push for Net Neutrality came from Silicon Valley content companies who were whining that ISPs such as Comcast, Time Warner and AT&T were slowing or threatening to slow content that sucked up massive amounts of bandwidth. They are after all the ones who have to invest to expand that bandwidth. These ISPs were at the same time telling companies like Netflix and Google that they could ensure timely delivery of their content if they paid for the extra bandwidth that was being used. The Silicon Valley companies squealed to Barack Obama and he started leaning on the FCC.

Now this should not be viewed as a defense of Comcast or Time Warner. Both are horrible companies when it comes to service and customer service. Terrible! And you might ask how can they survive if they piss off so many customers? Government, of course. In most places they reign as the result monopolies… imposed by government. 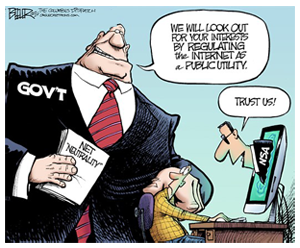 This might sound like it’s just about whether you can have House of Cards running simultaneously in three rooms in your house or in every home in your neighborhood. It’s not. It’s about the government seeking to control the Internet, the single most powerful vehicle for the advancement of the human condition in history. That might sound like hyperbole, but it’s not. Today, because of the Internet more people have access to more information, more quickly than at any point since… well, ever. Not only that, they also have access to more products and services, usually at lower cost than any generation ever enjoyed. And perhaps most importantly, they have a vehicle through which they can express their thoughts and share their ideas and highlight oppression & injustice more freely and to more people more quickly than has ever been possible in human history.

A decade from now much of that will be a mere distant memory. Not that the Internet won’t exist, it will. But it will be a government controlled utility rather than the Wild West platform for the free exchange of ideas that it is today. Don’t believe it? Don’t forget, a year ago this same FCC proposed sending “researchers to grill reporters, editors and station owners about how they decide which stories to run.” Six months before that Democrat Senators [mc_name name=’Sen. Dianne Feinstein (D-CA)’ chamber=’senate’ mcid=’F000062′ ] and [mc_name name=’Sen. Richard Durbin (D-IL)’ chamber=’senate’ mcid=’D000563′ ] were debating whether bloggers deserved 1st Amendment protections. And of course this is the administration that used IRS commissioners to stifle the free speech of opponents and the Justice Department to go after reporter James Rosen who just happened to be critical of it.

As bad as stifling innovation is, that’s not the worst of it. The worst? The death of free speech. Imagine if Richard Nixon had at his disposal the kind of control the FCC says it has now during Watergate. Ronald Reagan during Iran-Contra. Bill Clinton during the Monica Lewinski affair. George Bush in reference to GTMO or Abu Ghraib. 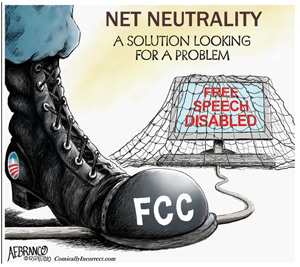 Barack Obama no doubt wishes he had that kind of power during Fast and Furious, the IRS Tea Party Scandal, Benghazi and countless other times. Now he pretty much will have it through his puppets on the FCC. Unfortunately the spineless obsequious leadership in the GOP will likely do nothing to stop this abuse of power. The result will be something slightly less onerous than being perpetrated by Barack Obama’s hero, Vladimir Putin, in Moscow. Putin can simply kill his opponents with little worry of consequence. Here in the United States, thankfully, that’s unlikely to go over as smoothly, however with the FCC’s unconstitutional overreach such measures wouldn’t be necessary. Why kill someone and make a martyr out of them when it’s much easier to simply muzzle them, or if that doesn’t work, label them a criminal and jail them with arbitrary regulations that you’ve set up specifically to target opponents? When government gets to decide who can be its critics or what its critics can say, it’s not a long march to a dictatorship.

Alas, our freedoms aren’t being taken from us by some foreign power with a gun pointed at our collective heads. No, staggeringly, American freedoms are being taken away by the very government a majority of brain-dead voters somehow sent to Washington. What’s worse, the opposition in Congress seems more than willing to capitulate and let the president get away with whatever he does, regardless of what’s in the Constitution, so long as they can stay in power in their little fiefdoms. With Obamacare and what the WSJ dubs the Obamanet, Barack Obama has succeeded in gutting both economic freedom and the freedom of speech in less than six years. Things that largely survived for 220 years… down the drain in six years! The consequences of the mistake that is Barack Obama in the White House will haunt Americans for decades to come, including those who were smart enough not to hand the keys of the greatest kingdom in human history to a petulant man more than willing to lie to get what he wants and a disdain for the very Constitution he swore to uphold.

We Know Why Police Didn't Breach the Classroom to Confront Texas Shooter...And They Admit It Was a Mistake
Townhall
Blue-check journo SCHOOLED for claiming he 'bought' the same gun online the Uvalde shooter used and it was 'like buying groceries'
Twitchy
Texas Department of Public Safety Provides Devastating Timeline of Uvalde School Massacre
Redstate
Why the Heck Did Amber Heard's Legal Team Call Her Back to the Stand?
PJ Media