A dab of Communism and a dash of Fascism, Barack Obama's economic philosophy in practice

The primary reason Communism doesn’t work is that it goes against the very nature of man. In Communism there is simply no motivation for anyone to work hard. When there is a zero correlation between the amount or quality of work you do and the compensation you receive, your motivation to work hard, or maybe work at all, simply evaporates. This is particularly true given that the compensation for the slacker at the next desk is equally without correlation as he continues to get the same salary regardless of whether he actually gets anything done or not. And while Communism as we know it has only been around since 1848, the ideas behind it have been around for much longer… and not surprisingly it was a failed ideology long before Marx and Engels gave it a brand name.

I’m not going to suggest that Barack Obama is exactly a Communist… even if he was, apparently he’s smart enough to lie about it if he knew it would harm his image… I do however think he’s a fan of one of the basic mantras of Communism: “From each according to his ability, to each according to his need,” with him deciding who needs what. At the same time he’s very much a fan of the Fascist economic model where private property exists but government mandates much if not all of its activity. For him everything else is to simply be manipulated in order to achieve those two tenets of his philosophy.

For six years Barack Obama has been doing everything in his considerable power to bring that philosophy into effect in the United States. In all fairness, many of the things he has pursued had their genesis in previous administrations, but under Barack Obama they found an unabashed champion who was willing to turbo charge them as he sought to “fundamentally transformed America”.

The scorecard of Obama’s accomplishments is breathtaking: 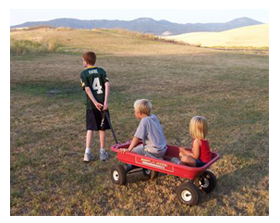 If the words Communist or Fascist are too strong for delicate sensibilities, let me paint the picture in a slightly different way. Imagine the United States is a wagon with a combination of passengers and people pulling it. Where the wagon goes to find food and sustenance and to build prosperity is determined by the people pulling it. As long as there are enough people on the ground pulling the wagon, and those people are willing and able to put forth the effort to figure out where they should go and how best to get there, everything works out fine. Over time however if enough people stop pulling and jump into the wagon such that the ratio of passengers to pullers becomes too great, the wagon will eventually stop, as will the pursuit of sustenance, prosperity and everything else and stagnation and collapse will begin. But wait! It gets worse! Not only are there too many passengers in the wagon, but they have put chains on the ankles of those pulling it, have decided they know better how to pull the wagon – despite the fact that they are not pulling anything – and they have decreed that they get to decide how everything is distributed. Welcome to Barack Obama’s world. To put things in explicit terms, in Barack Obama’s America 140 million people are working to support a population of 320 million, which includes a record 100 million adults not working. That is the lowest rate in history.

So, while the Communist Party USA may not be celebrating their party’s ascendance into the White House, they are no doubt cheered by the fact that the country is being “transformed” in their direction. That does not bode well for anybody associated with the American wagon, whether pulling it or passenger…