What six years of Barack Obama's economic incompetence has wrought

Now that Barack Obama’s first six years are over it might be nice to see what he has wrought, and compare him to another iconic president, Ronald Reagan.

Unemployment is the measure of those in the laborforce looking for work but can’t find it. At first blush Obama seems to be doing well using that measure. In February 2009 unemployment sat at 8.3% and by November 2014 it had dropped to 5.8%. In February 1981 Ronald Reagan took office with an unemployment rate of 7.4%, which by November 1986 had only dropped to 6.9%. Using the unemployment measure seems to suggest Obama’s policies trump those of Reagan. 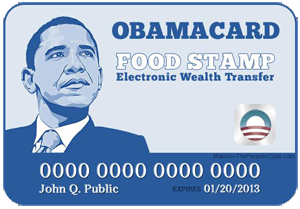 But some might argue that Obama faced a tougher economic situation than did Reagan. Not really.

When Ronald Reagan took office inflation was 10.1% and six years later it was 1.9% while under Barack Obama inflation started out near zero and has remained there throughout his terms. What’s ironic about this tame inflation is that it has much to do with dropping prices for things like big screen TV’s, mobile phones and oil, – the latter despite Obama’s best efforts – while core items that the poor spend most heavily on such as meats, poultry, fish, eggs and electricity, are hitting all time record highs.

When Reagan took office interest rates were 19.5% and by his sixth year they were down to 7.5%. When Barack Obama took office interest rates were at 3.25% and have essentially stayed in that area since. That extraordinarily low rate is in large part due to the Fed’s pumping of $4.5 trillion into the American economy since 2008, allowing the federal government to borrow like a drunken sailor.

Of course that pumping also has the impact of juicing the GDP numbers as there is more borrowing and investment going on than the fundamentals would otherwise support. And it’s in this easy money environment that Barack Obama’s biggest failure can be seen. In the six years he’s been president GDP grew by a total of 22%. Compare that to the same period under Reagan, where GDP grew by a whopping 42%. Of course Reagan did add substantially to the national debt, growing it by 6% of GDP during each of his first six years. But Obama borrowed even more, growing the national debt by 8% of GDP each of his first six years. Add to that the 5% the Fed kicked in each year with its Quantative Easing and it’s almost impossible understand how GDP could grow as slowly as it has under Obama.

The key however is hiding right in plain sight. Q4 GDP numbers give it away. The administration crows that the economy grew at a 5% clip in the last quarter of 2014. Not bad. What they don’t tell you is that fully half that uptick came specifically as a result of coerced Obamacare spending. Obamacare is a microcosm of what’s wrong with Obama and his administration. On the one hand it kills jobs, increases prices, eliminates choices and puts private practice doctors out of business. On the other hand, those very same regulations force Americans and companies to spend more on its mandates, which has the result of juicing GDP. So by regulatory fiat the government can remake the economy and claim Americans are better off in the process by juicing GDP numbers. Now imagine the same thing with hundreds of thousands of regulations over the last six years and you understand just how it’s the case that GDP seems to keep growing but Americans seem poorer.

To put the cherry on top of this indictment of Barack Obama’s economic incompetence is a quote from Ronald Reagan: “Welfare’s purpose should be to eliminate, as far as possible, the need for its own existence”. Barack Obama likely disagrees. When he took office there were 32 million Americans on food stamps. Today that number stands at 46 million. In six years Barack Obama’s economic policies have so damaged the country that 5% of Americans have been added to the food stamp rolls while fully one third of the country receives some form of welfare. All of this while the rich are paying more in taxes than ever, half the country pays no income taxes at all and the middle class try to keep their heads above water.  That’s what happens when your policies bring about the slowest economic recovery in the last half century.

Too bad no one saw this coming…