The red herring of Ferguson: The #1 cause of death for black men ages 15-34? Murder – by other black men.

One of the worst things about war is the fact that the people usually doing the fighting are those most physically capable of fighting, usually a nation’s strongest and most vibrant young men. The men most able to build or sustain a nation’s prosperity are the very ones that are going away to war and too often not coming back. As costly as war is, it’s usually undertaken because a nation, or its leaders or its citizens, think the sacrifice is worth achieving some objective.

The loss of such strong and vibrant youth is a cost that is paid not only by the families of the dead, but it’s paid by the communities and the nations that are left without whatever contributions the young men might have made to the world around him.

War is hell, as they say, and looking over a battlefield littered with a nation’s treasured youth is the perfect embodiment of that. The sacrifices always hurt, but they are to some degree understandable because they are undertaken in the pursuit of some greater good.

Which brings us to Ferguson, MO, and not just because it looked a lot like a war zone recently. No, Ferguson is important because of what sparked the riots: the shooting of an unarmed black youth by a white police officer.

To listen to the protesters is to understand that America is rampant with white cops killing innocent black men in every town or city. That is simply not true. More importantly, it’s a red herring. (Yes, white cops do sometimes kill innocent black men, but it’s relatively rare.) But why is it a red herring? Because it takes the focus off the fact that the number one killer of young black men ages 15-34 is… murder, and not by white cops or white people at all. It’s murder by other young black men! (For young black men ages 15-24, fully 50% of their deaths are due to murder!) How is it possible that in 2014 the number one killer of the most robust and vibrant elements of black America is murder? Not accidents. Not cancer. Not sickle cell anemia… it’s murder by other black men!

And this is where the connection with war comes in. During war the young men whose lives are lost are sacrificed for a purpose, for something that has been deemed in the national interest in one sort of another. Young black men who are dying on our streets and in our cities on the other hand are dying for… nothing.

Which is what makes the red herring of Ferguson so heartbreaking. Even if such protests were to ensure that no white cop ever killed another innocent black man, the scourge of death and murder that pervades the black community wouldn’t diminish by much beyond a small fraction of the total deaths.

So while the American media spent a week and a half obsessed with a burning Ferguson where protesters pelted cops with Molotov cocktails, bricks and urine, dozens of young black men were being killed in obscurity around the country by other black men. But of course it’s so much easier to throw bottles and make accusations than it is to advocate for real solutions to real problems. Problems like a dearth of fathers as 73% of all black children are born to single mothers. Problems like a crumbling education system where Democrats and the teachers’ unions keep the poorest children tethered to failed public schools. Problems like minimum wage laws that make it prohibitively expensive to hire young black men with little work experience, resulting in an unemployment rate in excess of 20% while the national rate is below 6%. Problems like a government welfare system that grows like an unbridled leviathan seeking to expand its budget rather than help the poor find their dignity, self respect and the pride that comes with being contributing member of society. 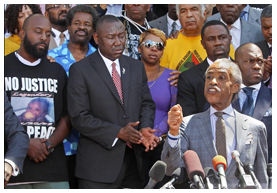 Which is the tragedy of the red herring of Ferguson. Regardless of what the circumstances were, losing a son is devastating for a family. Thousands of black families across the country experience equally painful losses each year. By focusing energy, passion, angst and media on the aberration of Ferguson it takes the spotlight off of where it should be, which is solving the problems that cause thousands of young black men to lose their lives every year whose families don’t at least get the solace of knowing their sons died fighting for something of value to them and society as a whole.