How long has it been since you thought about the American Revolution? In 2014 not that many of us spend our time thinking about the catalysts that caused that revolution over 200 years ago. Who has the time? Between jobs, families, bills, a bit of TV and some recreation and socializing, there are only so many hours in the day. That’s the beauty of things being settled… you can get on with other things. If we had to spend our days thinking about what kind of government we wanted, how would we get anything else done? It would be impossible. Think about election season every 4 years. From July through November we can’t escape it: campaign advertisements on TV and radio, signs on the side of the street, wall to wall press coverage and endless water cooler chatter. All that and we have a government that’ been largely settled for 150 years.

Sometimes however it makes sense to go back and look at why things happen. In the case of American independence and the Revolutionary War, it was not any single event that caused the war to begin, rather it was a series of things that took place over years. 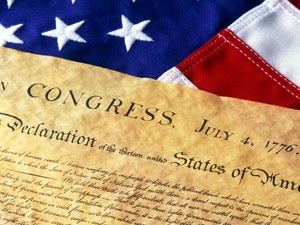 Among these things were well known events such as the Stamp Act, the Boston Massacre, the Intolerable Acts and the conflict at Lexington & Concord. Then there were other lesser know but equally important events such as The Quartering Acts of 1765 and The Declaratory Act. In all the Declaration of Independence lists 27 grievances against the King. Among them are:

Importantly, the most significant lines in the Declaration of Independence are not among those 27, but rather in the 2nd paragraph.

We hold these truths to be self-evident, that all men are created equal, that they are endowed by their Creator with certain unalienable Rights, that among these are Life, Liberty and the pursuit of Happiness.–That to secure these rights, Governments are instituted among Men, deriving their just powers from the consent of the governed, –That whenever any Form of Government becomes destructive of these ends, it is the Right of the People to alter or to abolish it…

… all experience hath shewn, that mankind are more disposed to suffer, while evils are sufferable, than to right themselves by abolishing the forms to which they are accustomed. But when a long train of abuses and usurpations, pursuing invariably the same Object evinces a design to reduce them under absolute Despotism, it is their right, it is their duty, to throw off such Government, and to provide new Guards for their future security.

Americans today are acting as Jefferson suggested most people do… they are suffering evils rather than throwing off the yoke of a despotic government. Jefferson suggests however that when the abuses become too much, the people will indeed revolt. So the questions in 2014 are two: Are close to that point of abuse that sparks a revolt, and is it too late to turn the tables on the usurpers?

On the first question, the answer is a resounding yes. While 2014 may not quite yet be George Orwell’s 1984 with an all knowing all seeing – and listening – all powerful government… We’re close. We have a government that uses the police power of the taxing authority to silence its critics. We have a government that has decided that children can be punished for their parent’s mistakes, even if it was the government who made it. We have a government that spies on its citizens with impunity. We have heavily militarized local police forces across the country and every federal agency seems to come with its own SWAT team, regardless of its mission. We have an executive branch that brazenly ignores the clear language of the Constitution. And then of course we have the shrinking pool of citizens who are forced to pay stifling taxes in order to support a growing horde of those suckling at the government teat.

On the second question, is it too late, the answer is less clear. Human nature suggests that at some point those who shoulder the burden of financing the government’s largesse will revolt. Today we don’t see taxpayers manning the barricades and storming America’s Bastilles so we clearly have some time to reverse course and strip the usurpers of their power.

Settled can be good, but as Jefferson notes, it can turn to complacency. And complacency can lead to rot. Whether it’s the five year reign of Usurper in Chief Barack Obama or the last 40 years of creeping comforts and expanding government, Americans have assumed that we’ll get through everything just because politicians tell us we will. That’s not how things work. Freedom and prosperity demand vigilance. Neither can survive where a government decides that they are its to withhold or grant. In 1776 fifty six men risked their lives and decided that they could no longer abide the complacency of accepting tyranny. And they started a revolution. How many Americans will come to the same conclusion in 2014 and risk far less when they turn off the television and enlist as foot soldiers in an electoral revolution in 2016? Only time will tell.