Gay Wedding Cakes, Religious Freedom and the Return of Slavery in America

The most common definition of a slave is: A person who is the property of and wholly subject to another. There is another definition however: A person entirely under the domination of some influence or person. Slavery has been outlawed in the US for 150 years, but some people want to bring it back… but not necessarily in the form you might think. Uncle Sam of course is not a master and citizens are not his slaves. The government – at least not the government defined in the Constitution – doesn’t have the right to tell Americans who they have to work for or who their businesses have to serve.

It can however, at least according to the Civil Rights Act of 1964, demand that businesses that offer to provide services to the public not discriminate based on race, color, religion, sex, or national origin. That means however that if you are offering to sell cakes, you must not decide that you will sell cakes to men and not women, to Jews but not Christians, to blacks but not whites, or to a native born American but not a naturalized citizen born in Canada.

Interestingly, other than religion all of the limitations are innate, things that people are born with or had from birth. That prohibition also applies to the later characteristics defined by the Americans with Disabilities Act. The CRA says what a business can’t do, it can’t discriminate based on a clear set of criteria… but it says nothing about what they must do. A black chef can’t legally refuse to provide service to someone who walks in simply because he’s white. He can however choose not to provide service to him when the man tells him that the event is a celebration of KKK history. That’s discrimination, but it’s legal discrimination and its well within the chef’s rights.

The CRA lists specific criteria upon which a business is not allowed to discriminate: race, color, religion, sex, or national origin. But that’s it. Other than those reasons any business can choose who they would like to serve. A 7-11 store is well within its rights to say “No Shirt, No Shoes, No Service”. By the same token a gun store can choose not to sell a gun to a drunk person and business can choose not to hire people with tattoos. A community can limit its inhabitants to those over 55 or a storekeeper with a Napoleon complex can choose to never serve customers over 6 ft. These restrictions may or may not be prudent, but none of them are illegal as businesses have the right to choose to whom they provide services within the framework of the CRA, the ADA and the Equal Protection Clause upon which both are based. 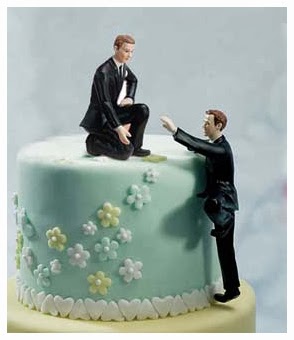 The point is, in almost every one of these cases the service providers did not refuse service because someone was gay. Rather, they declined to participate in an activity their faith tells them is sinful. Indeed the baker in the case actually offered to let the gay couple purchase any one of the cakes in his shop. He was simply refusing to bake a gay themed wedding cake.

The distinction between the activity and a customer’s gayness or lack thereof may be a fine one, but it is an important one. The CRA says businesses cannot discriminate against customers based on various innate or unchangeable characteristics. Significantly, the characteristic of being gay is not among them. Which means that theoretically businesses have the right to discriminate against gays or 22 year olds or journalists with no threat of government sanction. Nonetheless, most Americans oppose discriminating against people for their sexual orientation and the businesses in question were not doing so. (Similarly, 85% of Americans believe service providers should be allowed to decline to participate in gay weddings.)  They were simply declining to participate in an activity that their faith says is sinful.

The jilted couples in these cases looked to the government to force the said businesses to provide the services they wanted. In all three cases the government obliged stating that the religious objections of the business owners were trumped by the couple’s equal protections. That is both unfortunate and absurd. If the government can force a Christian baker to bake a cake for a gay couple, can it force a Muslim grocer who does special orders to special order pork? Can it compel the aforementioned black chef to cater the KKK’s event? Can it force a vegan landlord to rent his building to someone wanting to open a steakhouse? The answer of course is no, no and no and the reason is because Americans are not slaves and the government has no right to compel them to do things that go against their moral convictions.

That is likely news to people in government (and their liberal enablers) who believe they are the masters of the American people. They are not. Americans are free and by constitution they have given government limited powers – even if the government is increasingly obliterating those limits. Of those freedoms,  religious freedom is among the most important.  It is what brought the Pilgrims to America 400 years ago and it’s been a hallmark of American society ever since. A government commanding its citizens to do things beyond its scope is never a good idea, which Obamacare demonstrates on a daily basis. A government commanding its citizens to do something that goes against their religious faith is even worse because it undermines the fundamental legitimacy of the government itself. If these rulings stand, if the most basic freedom to abstain from participating in activities your religion tells you are sinful is now largely gone, then the progressive barbarians are no longer at the gate… they’ve entered your home, taken control of your life and have carte blanche to force you to do whatever it is they demand – or face ruinous consequences otherwise. Such is the kindling with which revolutionary fires are often started…