The Profound Rush Limbaugh: ”Have you ever noticed how under capitalism the rich become powerful, and under socialism the powerful become rich?

Love him or hate him, there is no debate about the fact that Rush Limbaugh is a genius. Last week he said the following:

I have to disagree with Rush slightly… that statement is indeed profound. Although he characterizes it as a minor little distinction for rhetorical purposes, his context demonstrates exactly how significant it really is.

When you think about it, on the most basic level, it makes perfect sense. In socialist, communist and fascist countries, despite the egalitarian rhetoric, invariably it is the people who control the infrastructure of the state who end up with the biggest bank accounts and grandest (relative) lifesyles. They decide who can do what jobs, who can get what permits, who can open up what businesses. Given that the state controls the avenues through which so much of life runs, is it any wonder that corruption is often rampant? Is it any wonder that while Muscovites were looking for food on barren supermarket shelves Brezhnev gorged himself at his Jurmala dacha? Or is it much of a surprise that while Mugabe has turned Zimbabwe into one of the poorest countries in the world he has accumulated billions of dollars in personal wealth? It comes as no shock that to get anything done in Mexico takes the greasing of palms of government officials all along the way. The reality is, when government controls most aspects of life, from the major to minutiae, they get to decide who is successful and who is not, and often they choose themselves their friends and their families.

Of course everyone wants success, but the difference between state control and free markets is who gets to decide what constitutes success and who gets to enjoy its fruits. With state control it’s the bureaucrats who get to decide while in free markets it is the citizens. One can quickly guess which produced “green” cars no one wants, a healthcare system that doesn’t work or a tax code so complex even its authors can’t understand it.

You may hate Wal-Mart, but no one ever forced you to shop there. Wal-Mart became a half a trillion dollar behemoth not by forcing customers to come into their stores, but rather by advertising what they were willing to sell and for how much. People willingly walk into their stores and voluntarily exchange their hard earned dollars for Wal-Mart’s goods. You may have heard that JD Rockefeller was a “son of a bitch” businessman, and you’d be right. But he earned his money by standardizing the industry and lowering prices on kerosene, gasoline, and a wide variety of other petroleum products as well. Although competitors were sometimes mad, consumers and the economy benefited dramatically. The success of Standard Oil was based on selling products to willing consumers, not on government redistribution. The same holds true today for Intel, Apple and Frito Lay, just as it did for others like Sears and Roebuck, Gillette and Howard Johnson a century ago.

In the United States numerous rich businessmen have converted their success into power. The Koch brothers come to mind. So too does George Soros and Michael Bloomberg. But the difference is, what those guys are selling, we don’t have to buy. 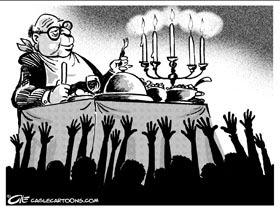 While the US may still ostensibly be a capitalist system, how long that will last is open for debate. Today we are rapidly becoming a command and control socialist country with Washington as the vortex. Government tells you what kinds of bulbs you can buy, who you have to rent your house to and how you can use your property among other things. It takes the money you worked for and uses it to give phones, EBT cards and birth control pills to those who didn’t. Basically Washington has the power, and now it has the money too. The Washington DC area now has 6 of the 10 richest counties in the country. Out of 3,100 counties in the US, 6 of the 10 richest in the Washington DC Metro area! To put that in perspective, Occupy Wall Street was worried about the country being run by the richest 1%. Those 1% guys are pikers, in reality the country is run by .0019% richest, and they live in Washington.

And why does money flow to Washington?  Simple.  That’s where the power is. Because that’s where the laws and regulations that restrict your freedom come from. Washington’s bureaucrats don’t solicit explicit bribes like they do in third world countries… but then they don’t have to. They earn twice what private sector workers do, have virtual lifetime employment, and have the “respect” that comes from having the power to destroy a business or an industry with a stoke of a pen. As a result, while some companies spend money in Washington seeking to suckle at the public teat, (defense, agribusiness and green energy industries come to mind) most firms today spend their money on lobbyists not to get dollars from government, but rather to influence legislation and regulations so that they can simply survive.

Capitalism is not yet completely dead in America. Thankfully guys like Mark Zuckerberg, Simon Cowell, Sean Combs and lots of other people whose names we’ll never know are able to create businesses that earn them millions or billions of dollars without stealing a single dollar from any one of us or eviscerating one iota of our freedom. But one has to wonder how long that will last. Today there are 92 million adults in the United States who are not working. From unemployment benefits that last for years to welfare programs that create lifelong wards of the state to regulations and taxes that disincentivize work, one has to wonder what the real agenda of Washington is. Is it to see a resurgent private sector where more Americans can support themselves and their families without government help, thereby inducing a reduction in the size of the army of bureaucrats and lobbyists? Or is it to slowly strangle capitalism so that more and more jobs and lives look to Washington for their preservation, which in turn means bigger government, more lobbyists and of course more money for Washington.

With Mark Zuckerberg getting rich off of us and our data, it’s an even exchange in that we have a free choice in deciding how much of that data we’re willing to exchange. If we don’t like it we can simply delete our Facebook accounts. However, when the Washington establishment uses the police power of government to get rich off of us, we have no options, we can’t simply choose to not pay taxes or simply start another business without Washington’s interference. It’s not possible. What we can do however is work fewer hours, shut down our businesses or take the path that more and more Americans are taking every day; to simply give up working altogether and look to Washington for our every need. My guess is that Rush would probably say that is exactly what the left’s agenda is. And as usual he would be right.