From your Facebook passwords to Section 8 housing... why Barack Obama should be impeached for dismantling the very Constitution he swore to preserve, protect and defend.

We all know that Barack Obama was a Constitutional Law professor at the University of Chicago. He spent more than a decade lecturing on what is possibly the greatest document ever written by men. Later, when elected to the Senate and then the White House he swore to defend that same Constitution. Despite all of that, one has to wonder, does Barack Obama not actually understand the document he has spent a quarter century studying, teaching and “defending” or is he some kind of self directed progressive Manchurian Candidate? Whichever is the case, one thing is unassailable, Barack Obama is a using the power of the presidency to eviscerate the Bill of Rights. Not the whole thing mind you, but enough to turn the granite foundation of American freedom into a termite ridden balsa wood floor that could give way at any moment.

So how has Obama undermined the Bill of Rights? Let us count the ways…

1st Amendment: “Congress shall make no law respecting an establishment of religion, or prohibiting the free exercise thereof; or abridging the freedom of speech, or of the press…”

Just to be clear, in this context the framers said Congress but meant the federal government because they expected Congress would make all laws and the President would execute and enforce them.

Freedom of Speech: President Obama used the IRS to quash the voices of the most rabid and politically dangerous of his opponents, the Tea Party and in doing so stole the 2012 election.

Freedom of the Press: Obama’s Justice Department purposely bypassed judicial review and secretly subpoenaed records from the AP as well as the personal phone records of a number of its editors and reporters in an attempt to discover the source of a leak about terrorist plots. This is the same Obama Justice Department that characterized routine reporting practices as criminal activity by labeling Fox News reporter James Rosen a “co-conspirator” for reporting on North Korea and then tracking both his professional and personal actions and emails. In these cases, and perhaps others yet unknown, the President and his team sought to use the police power of the state to intimidate the press.

2nd Amendment: A well regulated Militia, being necessary to the security of a free State, the right of the people to keep and bear Arms, shall not be infringed.

Right to keep and bear Arms:  The Obama administration has spent much time and effort seeking to find ways to limit American’s right to bear arms. From supporting UN treaties that require gun registration to floating the idea of forcing psychologists to report on your gun ownership, to talking about working on gun control “under the radar”, President Obama has made it clear that the 2nd Amendment is no barrier to his desire to eliminate our right to own guns.

4th Amendment: The right of the people to be secure in their persons, houses, papers, and effects, against unreasonable searches and seizures, shall not be violated, and no Warrants shall issue, but upon probable cause, supported by Oath or affirmation, and particularly describing the place to be searched, and the persons or things to be seized.

…to be secure in their persons, houses, papers, and effects: This is one of President Obama’s favorite targets. We’ve all heard of the NSA gathering data on citizen’s phone calls and Internet surfing habits without warrants, which would seem a crystal clear violation of the 5th Amendment. Now we discover that the Obama administration is demanding that major Internet companies turn over users’ stored passwords. required to have data collecting black boxes installed. Those boxes collect a variety of data from how fast you’re going to whether or not you’re wearing your seat belt to how long it took you to step on the brake. Add to that the fact that most cars will have OnStar like capabilities and the government could pull a NSA redux and easily know everything about every trip you ever make as well as listen to everything you say the entire time.

That means that potentially a phalanx of nameless, faceless bureaucrats from the IRS or the NSA or the DHS can sit there and scrutinize your every message or like or post on Facebook or Match.com or any other social media platform. And it’s not just online.  In 2012 the NTHSA proposed that by 2014 all cars be requiredto have data collecting black boxes installed.
Those boxes collect a variety of data from how fast you’re going to whether
or not you’re wearing your seat belt to how long it took you to step on the
brake.  Add to that the fact that most
cars will have OnStar like capabilities and the government could pull a NSA redux
and easily know everything about every trip you ever make as well as listen to
everything you say the entire time.

5th Amendment: …Nor shall any person be subject for the same offence to be twice put in jeopardy of life or limb, nor shall be compelled in any criminal case to be a witness against himself, nor be deprived of life, liberty, or property, without due process of law; nor shall private property be taken for public use, without just compensation.

This Amendment too has come under particular attack by the Obama administration.

Double jeopardy:  After the jury returned a not guilty verdict in the Trayvon Martin trial, the Justice Department actually set up an email address with the specific purpose of soliciting tips so that it might help them bring charges against George Zimmerman for the same act, only under a different statute.

…private property be taken for public use, without just compensation:  Then there is the Takings Clause that has been felled by Barack Obama’s hand. In 2009, after failing to intimidate two state retirement funds who held secured Chrysler bonds, the President ignored contract law and simply took their property for the government and the UAW without just compensation.

…private property be taken for public use, without just compensation:  Finally there is the administration’s plan to achieve their diversity goals by using a variety of tools to force communities – and indirectly owners of suburban rental properties – to accept government Section 8 vouchers. Section 8 is a welfare program where government pays most of the rent and utilities for low income renters. While some landlords may be happy in the short term to have tenants whose bill gets paid on time, in the long run they and their neighbors will experience a significant “taking” of their property as the introduction of Section 8 housing almost invariably leads to dramatic increases in crime rates followed by significant declines in property values.

And this of course is only a partial listing… 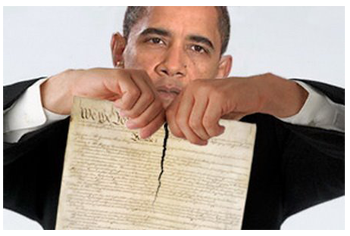 Barack Obama sees the Constitution in general as little more than a list of suggested rules to be considered and the Bill of Rights in particular as a Maginot Line to simply be bypassed whenever deemed necessary. The unfortunate thing about all of this is that federal power is like Pandora’s Box, once it is unleashed, it’s almost impossible to rein in. The perfect example of this was last week’s House bill seeking to limit the NSA’s power to spy on Americans. It failed.

What makes this particularly unseemly is the fact that the Bill of Rights was the key to the ratification of the Constitution in the first place. Had it not been for the Massachusetts Compromise it’s likely that the Anti-Federalists would have carried the day and the Constitution would never have been ratified.

Given the central role the freedoms codified in the Bill of Rights have played in the triumph and prosperity of the United States, it’s no wonder that Barack Obama seeks to disembowel it. In 2008 he promised to “fundamentally transform the United States”. He has achieved his goal. Thanks to Barack Obama, in 2013, before a citizen can begin thinking about setting off on some new adventure, begin solving some new (or old) problems, begin dreaming of new ideas or innovations, consider starting a new company or doing any one of the millions of things Americans have done for centuries, we must now stop and wonder what that act might look like if it were pulled out of context by some apparatchik, wonder how our private conversations might sound if heard by a government lawyer who knows nothing about us and for whom those words were not intended, wonder what might befall us if we criticize the government or what might become of our investments if they end up on the wrong side of some government redistribution scheme… In other words, we have to imagine we’re living in George Orwell’s 1984.

All of that is by definition the opposite of freedom and they are the kinds of fears dictators seek to instill in their subjects. That is exactly why the Founding Fathers insisted on a Bill of Rights as the price for the ratification of the Constitution with its federal system. Barack Obama has driven a knife through the heart of the freedoms Americans fought and died for for centuries and he should be impeached for dismantling the very Constitution he swore to preserve, protect and defend.

Netherlands to Buy and Close 3,000 Farms—Whether Farmers Like It or Not
Bob Hoge