One of my favorite shows is a program called “Person of Interest’ on CBS. The story revolves around a government computer that knows when someone somewhere is in danger and passes that information along to a team of ex government types who go on to save that particular Person of Interest. The show’s device is that the machine can tap into virtually every piece of electronic data on the planet and harness the video feed from every surveillance camera in the world.

While the heroes saving the day makes for a feel good show, it’s never a cakewalk. Besides the bad guys targeting each week’s Person of Interest, the good guys have to deal with the ongoing threat from a cabal of dirty cops as well as the machinations of the government agency that used to control the machine.

Although Person of Interest is fiction, the idea of a Machiavellian government that seeks to manipulate events, extinguish opposition and deceive its citizenry certainly isn’t. In real life we are seeing just such a government emerge right in front of us. Not that it hasn’t been there for years, because it has, but up until now it was largely cloaked from sight for those depending on the fourth estate to tell them what to see. 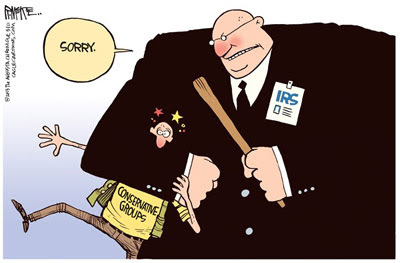 Now the onion is beginning to peel. Today Washington is overwhelmed with scandals of the Obama administration seeking to use bully pulpit and the police power of government to effect its political ends. From the constantly shifting talking points of the Benghazi story to the Justice Department seizing AP records, to the EPA head seeking to hide her correspondence to the IRS muzzling groups opposing President Obama, it seems like every day brings a new story of deceitfulness and manipulation.

As much as I’d love to see the Obama administration run out of Washington, they are largely footnotes in the bigger story here. That bigger story is actually quite simple: Big government.

Big government is a bad thing. Big government in the hands of manipulative, pernicious, vain and self righteous bureaucrats and politicians is a worse thing. That is exactly what we have today with a giant all powerful government and an administration that sees itself as all knowing, infallible and beyond scrutiny or accountability.

While part of the solution may be holding Barack Obama and his minions responsible for their despicable actions, that alone does not solve the problem. The same machine with a different operator is just as dangerous, just perhaps to different people. Indeed, the citizens of the United States should not be at the mercy of one man’s or one administration’s propensity for honesty in order to exercise their rights and pursue their happiness. And that idea should apply to everyone, whether a progressive or a libertarian and everyone in between. 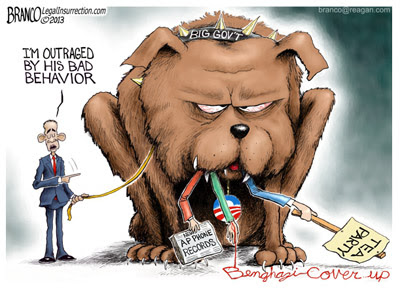 The solution to solving the problem we are currently facing is not to be found in throwing the rascals out. The solution is to pare back government to its Constitutional limits, pare it back to such a degree that it does not hold in its arbitrary hands the keys to a citizen’s success or failure or their ability to live their lives or exercise their rights.

The IRS can only threaten citizens because it controls the tax code and has the police power of the government to enforce its capricious rulings. Not only does it control the tax code, it has made that code so byzantine that no one – including its own agents – knows how to interpret it. Replace the income tax with the Fair Tax and you eviscerate the IRS’s ability to intimidate and coerce citizens.

Similarly, the EPA can only dictate a citizen’s prosperity or poverty because it too has the police power of government to enforce its arbitrary judgments. What’s more, over its forty year history the EPA has morphed itself from regulating pollution to regulating virtually anything in the economy that moves, manufactures or energizes. Similar unbounded overreach can be found throughout the government from the SEC to OSHA to the Justice Department.

Across the board the federal government should be winnowed to its bare Constitutional bones. Getting the unaccountable government out of the politics and patronage businesses will once again allow citizens to pursue happiness as they define it without making them hostages to the capricious whims of bureaucrats and politicians.

Might it not be fitting that the Obama administration was brought down by the weight of its own arrogance? That the IRS was felled by its own illegal attempts to hobble groups opposed to IRS overreach? That the march to ever bigger government was reversed as a result of big unaccountable government?

Samuel Adams once said: “If ever time should come, when vain and aspiring men shall possess the highest seats in Government, our country will stand in need of its experienced patriots to prevent its ruin.” He was no doubt talking about the Tea Party movement.