Barack Obama and Benghazi: What is the body count that separates the president from the candidate?

There have been three different parts to the Benghazi story. Not surprisingly, Barack Obama has managed to fail spectacularly in all three.

The first aspect of this failure has to do with the run-up to September 11th. Given terrorist’s general penchant for anniversaries and the fact that September 11th is such a trophy date for them, the Obama administration should have had every American embassy and consulate on the highest security level possible, with terrorist friendly places like Libya, practically on lockdown. Add to that the chaos associated with the fledgling government and Libya should have been ground zero for extra security measures.

Sadly, it was not. The State Department, in the specific person of Hillary Clinton, denied repeated requests for increased security. Indeed the American mission at Benghazi “was like a cardboard building, there wasn’t even bullet proof glass” and security personnel “were not even allowed to have bullets”. 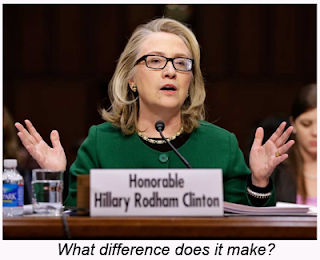 The second aspect of failure at Benghazi was the response to the attacks themselves. The attack on the American compound began on September 11th at 9:40 PM local time, 3:40 Eastern time. In addition to dozens of people storming the front entrance to the compound the attack included small arms fire, mortars and RPG rounds. By 6:00 AM local time the attacks on the compound and the annex were essentially over and the survivors were being transported to the airport. During the 8 hour siege no support came from outside of Libya – although a six man security team from Tripoli (including 2 DOD employees) arrived at 1:30 AM to help evacuate personnel and retrieve bodies of those killed, including Ambassador Stevens. There was however never any military support sent. Of note is the fact that 3 hours after the attacks began, the Secretary of Defense ordered anti-terrorism security teams sent from Spain, but five hours later, by which time the attacks were over, they had not even gotten off of the ground. More consequentially however is the fact that prior to the attack on the annex a Special Forces unit in Tripoli was preparing to fly to Benghazi. They too never got off the ground because they were told to stand down, that they couldn’t go because they didn’t have authority. This is in stark contrast to the administration’s claim that no one was ever given a stand down order and that all available resources were used.

The third aspect of failure, and the most consequential for the American people as a whole, although certainly not for the families of the victims of the attacks, is the obfuscation and cover-up. Coming just 2 months before the presidential election, Barack Obama made the conscious decision to lie to the American people. Indeed, in an attempt to further his administration’s fiction that terrorism was on the wane and that America was once again loved around the world, Barack Obama tried to pretend as if nothing of consequence had happened as he jetted off to Vegas on a campaign stop. What’s worse, five days later, despite knowledge to the contrary, he trotted Susan Rice out in front of the nation to lie and blame the events in Benghazi on a YouTube video. Later, Hillary Clinton claimed that she had never denied any increased security requests from Libya. Today, eight months later we know that both were lies.

What is particularly disturbing about the events surrounding Benghazi is that they are sequential, i.e. they compound one another. After any one of the three they could have decided to make good, honest decisions. They didn’t and taken as a whole the Benghazi affair is a disaster. We all know that mistakes get made in life and in any organization, government or otherwise. As they say, nobody is perfect and we should not expect our politicians to be so. And we don’t. We do however expect them to be competent and honest. In this case Barack Obama and his administration showed themselves to be not only imperfect, but incompetent, dishonest, and most of all, self-servingly callous with the lives of four Americans who were in Benghazi serving as representatives of the American people.

It’s possible for Americans to believe that in the chaos of Libya in the summer of 2012, that somehow security measures were not quite what they should have been or that the security in place seemed adequate but turned out to fail in a perfect storm of events. After all, “No battle plan ever survives contact with the enemy”.

What’s not possible for Americans to believe however is that in the midst of a raging battle of unknown duration, the President of the United States would refuse to allow Special Forces to attempt to protect and rescue those Americans who were being attacked. From the very beginning the administration understood the gravity of the situation – both on the ground and for their campaign. Rather than jettison the fiction of a terrorism free middle east, the president choose to order reinforcements to stand down. Additionally, later pronouncements that military aid from outside Libya would not have arrived in time are simply absurd. As far as we know the terrorists do not punch clocks for an 8 hour shift of causing mayhem. By definition a terrorist attack timetable is not coordinated with the victims beforehand. In the middle of the battle there was no way of knowing if it would last 5 more hours or 5 more days. In that light the decision to refuse reinforcements shows Barack Obama to be at best an incompetent Commander in Chief and at worst a narcissistic politician for whom his power is the only issue of concern. 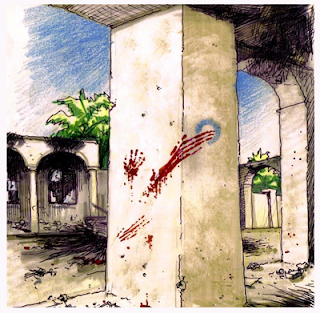 Finally there is the cover-up. Every American understands that safety and security are messy affairs and that tragedy occurs and people die, often brave people who have willingly borne the burden of defending us. While Americans might be able to accept as human the misjudgments in preparation in the run up to September 11th, and while they might reluctantly accept the fact that they have elected an incompetent Commander in Chief, they will not, or at least should not, accept a president who, when four Americans die on his watch, lies to the American people about the cause so that he can win reelection. At some point you have to ask, is there nothing that rises above politics? What is the body count that separates the president from the candidate? What if the number had been 8 victims? Would 16 victims have been enough bloodshed to cause him to delay his trip to Las Vegas? Had 20 Americans died would they still have dared to blame it on the video?

Barack Obama has shown himself to be an incompetent president, an ineffectual Commander in Chief and most of all a pernicious politician. One has to wonder where things will go from here. Say what you will about Richard Nixon, when the time came he at least knew when the game was up and had the grace not to drag the nation into a constitutional crisis. If we get to that point with Barack Obama one wonders if grace will emerge as one of the character traits that’s been hidden for the last five years… Don’t count on it.