Those who don't learn from history are bound to repeat it... Barack Obama pushes sub-prime mortgages... again!

There’s something macabre about an imminent train wreck, you know exactly what is coming but you can’t help but watching. Now imagine that instead of watching that train wreck from atop a building a safe distance away, you’re standing right between the train and the tanker truck that has stalled on the tracks. That’s a different story all together. At that point, rather than being a mere fascination it’s a matter of life or death. You’ve seen the damage a train wreck can do. That’s why it was fascinating in the first place. The difference now of courses is that when that giant mushroom cloud of smoke goes up, you’re going to be part of it. So, just as instinct kept you looking at the train in the first scenario, in the second one it causes you to turn and run as fast as you possibly can. If you can only get far enough away, you can avoid both the explosion and the crushing impact of one of the derailed cars rolling over you. 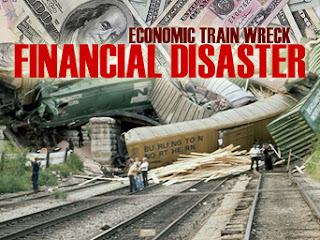 Well, you might want to think about running in real life, but it has nothing to do with train tracks or tanker trucks. It has everything to do with Barack Obama and the left’s train wreck of economic policy.

As virtually every conscious American knows, the United States economy took a body blow in 2008 with the financial collapse. Despite what anyone tells you, the collapse was 100% the product of government policies stretching back to Jimmy Carter and doubled down by Bill Clinton. That policy, in a nutshell, was called the Community Reinvestment Act. The act “encouraged” banks and mortgage lenders “to help meet the credit needs of the local communities in which they are chartered consistent with the safe and sound operation of such institutions.” Essentially, banks were being forced to make loans in the communities in which their depositors lived.

Now, think about that. People put their money in banks in order to save it and maybe grow it a little bit. They want more security than what they might get by putting the money under their mattresses. Now, the government comes along and says that banks, rather than lending money in the safest and most profitable manner possible, must lend in particular neighborhoods, regardless of the opportunity to do so profitably.

But of course the government didn’t stop there. They then decided that banks were not making enough home loans to minorities and decided to force them to do so. So now, banks, not only have to lend in certain neighborhoods, but they have to make loans to certain people, regardless of their creditworthiness. By 2005 fully 22% of new mortgages had to be “special affordable” loans targeted at low income buyers. 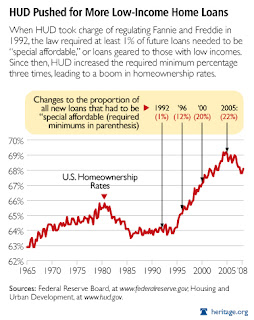 Banks of course complied, with a wide variety of special loan products from zero money down to ARMs and no income verification. And just to make sure that banks were making the loans, the government, in the form of Fannie Mae and Freddie Mac were assuming the risk by buying the mortgages. If that sounds like a disaster in the making… it was. The resulting financial collapse saw the evaporation of trillions of dollars of citizens’ savings and investments, not to mention sending the economy into a recession.

The government essentially manipulated lending data and created a financial train wreck and we were all forced to stand by and watch the whole thing. Thankfully most people avoided getting immolated in the flames, even if their hair and clothes got a little singed along the way.

In a rational world, having survived the meltdown and struggling to get the economy back on its feet the government would have learned its lesson and gotten out of the financial manipulation business. Not so much.

The Obama administration believes the “recovery” is leaving too many people behind. As such, it has decided that banks once again need to be “encouraged” to make more loans to low income, high risk borrowers. But it’s not just encouraging banks to do so, it’s facilitating their doing so, in the exact same manner Fannie Mae and Freddie Mac did before the collapse. Only now, instead of those two failed institutions playing the heavy it’s the Federal Housing Administration (FHA) that is putting taxpayer’s money behind the risky loans.

This policy shows everything one would ever need to know about liberals in general and Barack Obama in particular. In the face of crystal clear evidence that such a policy is a recipe for a financial disaster with seismic repercussions, they don’t care. Their ideology trumps reality. They are willing, even in a time of dire straits, to put the economy in peril simply to support their fiction that the rich are discriminating against the poor and minorities.

At the end of the day one has to wonder what is going through the heads of the people running Washington. This is the logical outcome of their willing ignorance in relation to the causes of the financial collapse. Their “greedy banks” screeds may have had a sliver of truth to them, but banks were in no way the proximate cause of the meltdown. There were indeed greedy bankers who made lots of money, sometimes off of poor people, but they were enabled and incentivized by government policy.

One would think with the economy still limping along with the injuries suffered in the derailment of a mere four years ago, that reality would replace ideology. Apparently not so much. This of course is a dance we’ve seen played out many times before. From Athens to Paris to Caracas, populist messages may bring electoral victory, but they rarely deliver economic victory. As Washington embarks on this suicidal populist train wreck, you may want to consider averting your eyes and figure out how to avoid getting crushed when the predictable damage begins…